Heather Brown (television)
Tara Sands (audiobook)
Tatum Marie Fjersted (video game)
Lizzy Morris is the protagonist of One Day at HorrorLand, Return to HorrorLand, Escape from HorrorLand, and The Streets of Panic Park.

The Morris Family, along with Luke's friend Clay, get lost on their way to Zoo Gardens Theme Park, and when they see a billboard sign advertising HorrorLand, they decide to go there instead. Once in the park, Lizzy, Luke, and Clay go off on their own to have some fun, noticing numerous "No Pinching" signs. After a few frightening experiences on the rides, the family tries to leave, but find the park gates locked and the Horrors march toward them and try to have them pushed in a bubbling purple pond. When the HorrorLand MC tells the family that everything in HorrorLand was serious to them, Lizzy realizes that this includes the signs she saw, so she pinches the HorrorLand MC, causing her to deflate. As the other Horrors come to her aid, it allows the Morris' and Clay to escape by hijacking one of the HorrorLand buses. However, when they get home, they discover that one Horror had followed them. He gives them passes for next year.

The Morrises and Clay are the first to escape HorrorLand alive.

Derek and Margo Strange, hosts of a television show called "The Strange Report", convince Lizzy, Luke, and Clay to go back to HorrorLand with them so that they can expose it as an evil, dangerous place. In the end, however, it turns out that Derek and Margo are working for the horrors.

Lizzy is also in the PC game, Escape From HorrorLand, a non-canon direct sequel to One Day at HorrorLand.  The games begins when Lizzy, Luke, and Clay suddenly find themselves back at HorrorLand after touching the passes that were given to them. Throughout the game, you (the player) must help Lizzy rescue Luke, Clay, and her parents and escape from HorrorLand. In the game, she is played by Tatum Marie Fjersted.

In order to solve the mystery of what's happening at HorrorLand during the events of the Goosebumps HorrorLand book series, Lizzy and Luke Morris launch a blog to post clues information and information on the HorrorLand theme park. The site is mostly run by Luke, but Lizzy contributes in the form of extracts from a "Welcome to HorrorLand" guidebook. Since the site opened, they've received correspondence from Madame Doom, Monster-X, and Slappy the Dummy.

Lizzy appears as a playable character alongside other children from the Goosebumps series, in which they must defeat The Headless Ghost in order to escape a deadly graveyard.

Lizzy is known for being the calm one in her family. She is a real peace-maker and always finds a way to balance an argument and is always calm in any emergency. But there have been moments when Lizzy had lost her cool self, such as when Luke is annoying her and when they had their adventures in HorrorLand. Lizzy can also be uncomfortable and worrying, but she also likes to have some fun and have a good laugh. She is very close to her family and is always ready to stop her parents arguing before they really got into it, and she occasionally laughs along with Luke and Clay on some things. Lizzy is a very caring person and is always willing to help anyone out if they are in serious trouble. 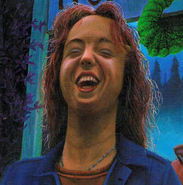 Lizzy as depicted on the Dutch cover of One Day at HorrorLand.