When the Ghost Dog Howls

Little Shop of Hamsters is the fourteenth book in the Goosebumps HorrorLand series, and the second book in the Chiller House arc. It was published in 2010.

The cover art shows a small horde of angry hamsters.

"INSTA-GRO PET: Amaze your friends with a GIANT creature!"

Sam desperately wants a pet. Too bad his parents don't think he's responsible enough and will barely let him keep the weird Insta-Gro animal from the HorrorLand gift shop. To prove he's responsible, Sam takes an after-school job in a pet store that sells nothing but hamsters. To his horror, Sam soon finds that cute little hamsters can become very UNCUTE monsters. Suddenly Sam isn't fighting for a pet---he's fighting to survive! Could the HorrorLand souvenir have anything to do with this?

Sam Waters and his friend, Lexi Blake, are visiting HorrorLand. Sammy informs the reader that he really wants a pet. The two decide to visit the Spear-It Café. Sam and Lexi realize that they are the only customers in the restaurant. The kids are briefly introduced to Chef Belcher. Sam orders the shrimp basket, but when his meal arrives, he notices that the "shrimp" look like leeches with wings. The creatures begin crawling onto Sam's arm. Chef Belcher pours some hot sauce onto Sam's arm, and the creatures fall off. The kids flee from the restaurant and travel to the Chiller House gift shop, and the kids are introduced to Jonathan Chiller. Lexi finds a package labeled "Insta-Gro Pets", and she suggests that Sam should buy the package. Sam prepares to buy the package along with a fake cell-phone candy dispenser, but Chiller Sam the items and a miniature Horror statue for free, insisting that Sam can pay later.

Back in their home town, Lexi and Sam are walking together when they notice a new store called "Little Shop of Hamsters". The kids enter the store, and Sam finds a massive display case filled with hamsters. The two friends meet Mr. Fitz, the store owner. Mr. Fitz asks the kids help pour Vito-Vigor, a special concoction, into the hamsters' water dispensers. The kids leave the store and walk for several blocks before Lexi reveals that she stole a hamster for Sam. Sam wants to return the creature, so he puts it in his pocket and heads back to store. When he gets to the store, it is closed. Since the door is not locked, Sam enters the shop. The hamster manages to eat one of the candies from Sam's HorrorLand candy dispenser. The hamster clings to Sam's shirt in an attempt to get more candy. Sam decides that it is best to enter the hamster cage and pry the creature off in an area where it cannot escape. While Sam is in the cage, Mr. Fitz returns. Sam says that the hamster had clung onto Lexi's vest, and she didn't notice until they were several blocks from the store. Fitz seems to believe the story. Sam goes home, and Lexi comes over to his house for dinner. Sam's three year old brother, Noah, is being very annoying during dinner, so Lexi decides to distract him with an Insta-Gro Pet. Lexi opens the package and puts a small spongy cube into Noah's glass. The sponge expands and shatters the glass. The sponge grows so large until it knocks Noah out of his chair, and it doesn't stop growing until it touches the roof. Sam is blamed for the event.

Much later, Sam is tasked with baby-sitting his brother. His mother says that this will be a test to see is Sam is responsible enough to own a pet. Lexi comes over, and shows Sam her iPhone. Sam goes to check on his brother, only to arrive just in time to see his brother put an Insta-Gro Pet into his mouth. Sam has to pry open Noah's mouth and pried the sponge out. Noah begins crying, so Sam gives him a candy from his HorrorLand candy dispenser. Sam's mom comes back just in time to see Sam giving Noah candy, and she becomes really upset.

Sam goes back to Fitz's shop, and he offers to work for Fitz. Sam thinks that having a job will prod him to be responsible. Fitz, in need of help, agrees. Fitz also promises to call Sam's mom after several weeks and let her know how responsible Sam is. Lexi enters the shop, and she also asks for a job. Fitz says that there isn't enough work for her. Lexi sees Mr. Fitz's hamster suit, which is a giant hamster costume that Fitz wore outside of his store in order to garner attention. Lexi offers to wear for him. Fitz asks Sam to pour wood shavings into the bottom of the giant hamster cage. Sam enters the cage, but he is shocked to see the freckled hamster that he had returned earlier standing on its hind legs. The hamster leaps onto Sam, and Sam drops his candy dispenser. Since the hamster clearly wants more candy, Sam tosses one piece to the hamster, but another hamster eats it first. Sam gives both hamsters one more piece. The two hamsters begin furiously fighting. Sam assumes that the candy has made the hamsters violent. The hamsters then attack Sam and begin foaming at the mouth. Sam exits the cage.

That night, when Sam goes home, he realizes that he doesn't have the candy dispenser. He realizes that it must still be in the hamster cage. The next day after school, Sam goes back to the store. Sam enters the cage and manages to find the dispenser, but he is startled when he finds that it's empty. The hamsters all stand in a circle, seemingly waiting for Sam. Terrified that the hamsters will attack him, Sam tells Fritz that he feels sick, and he goes home. That night, Lexi calls Sam. Sam confesses his mistake, and she suggests that Sam should contact the maker of the candy dispenser. Sam checks the box and finds out the candy was made by a company called Phoney-Phone productions, and the box also lists a phone number. Sam calls the number, and the representative tells him that the candy was very dangerous, but then reveals that he is only joking. He assumes that Sam is joking.

The next day, Sam goes back to Mr. Fitz's shop. Sam tries to confess his mistake to Mr. Fitz, but he ignores Sam. He tells Sam to clean the cage. Sam enters the cage and finds all of the hamsters stacking each other. The hamsters begin crawling all over Sam and tearing at his clothes. The hamsters pull something out of Sam's pockets. Sam looks down and sees that it's the package of Insta-Gro Pets. One hamster eats an Insta-Gro Pet and begins growing. The giant hamster flings Sam back and forth. Desperate to fight the hamster, Sam eats the remaining Insta-Gro Pet. Sam immediately grows and begins fighting the giant hamster. Sam knocks the hamster unconscious, and it begins to shrink back down to its normal size. Sam assumes that this is because Insta-Gro Pets only stay huge for a short period of time before shrinking back down to their regular size. Soon, Sam begins shrinking as well.

Mr. Fitz comes out from the back of the store. Sam tries to explain, but Mr. Fitz cuts him off. Fitz revealed that the security footage had recorded the whole ordeal. Fitz also reveals that the candy wasn't what was turning the creatures mean. The cause of the creatures' aggression was the Vito-Vigor. Fitz says that he has been developing the formula for the Worldwide Hamster Wrestling League or possibly even the army. Fitz demands to know how Sam turned a hamster into a giant, and he refuses to let Sam leave. Lexi enters the store, which distracts Mr. Fitz just long enough for Sam to open the hamster cage and set all of the hamsters free. The two kids run away from the shop during the confusion. While heading home, Sam admits that he is relieved. Lexi says that she wishes she had another bottle of Vito-Vigor. Sam asks Lexi how many bottles she drank, and she reveals that she likely drank more than ten bottles. She begins foaming at the mouth, and she bites Sam.

Several days later, Sam reveals that the bite Lexi had given him wasn't very bad. He also reveals that the Vito-Vigor wore off after a day or two, and he lost his interest in getting a pet. Sam opens his closet and sees that the miniature Horror statue that Chiller had given him was glowing. Sam feels drawn towards the light. For Sam, everything suddenly goes dark, and after a few moments he realizes that he is in Chiller House. Chiller greets Sam and informs him that it is time for him to pay for his Insta-Gro Pets. Chiller informs Sam that they must now wait for the others to arrive...

Persian (Ordibehesht)
Add a photo to this gallery 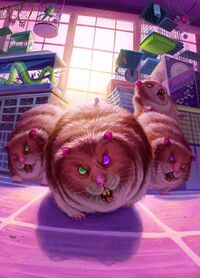 Retrieved from "https://goosebumps.fandom.com/wiki/Little_Shop_of_Hamsters?oldid=124880"
Community content is available under CC-BY-SA unless otherwise noted.