Goosebumps Wiki
Register
Don't have an account?
Sign In
Advertisement
in: Books, Give Yourself Goosebumps, Transformations,
and 19 more

Attack of the Beastly Babysitter
Little Comic Shop of Horrors is the seventeenth book in the Give Yourself Goosebumps gamebook series. It was published in 1997.

The cover illustration depicts a tusked, green, lizard-type creature in a comic-book store with some comic books scattered on the floor. The creature is holding a crumpled page from a comic-book in each of his hands, and a comic book is impaled on his right tusk. The creature is also wearing a Superman-type suit, only it has "Super Lizard" on the front of it.

LAUGH AT YOUR OWN RISK!

You're walking through a creepy part of town when you find a new comic shop—Milos Comics Dungeon. Dungeon is right. The place is dusty, dingy, and really dark. You can see the comics are awesome. But there’s something you can't see. Trouble. It’s waiting—for you.

If you choose to go downstairs watch out for Milo the Mutant. He's got big, bad plans for you. What? You say you'd rather stay upstairs? Not such a great idea—unless you want to battle the worst villains in the history of comics! Do you have what it takes to be a superhero?

After attending a boring after school comic-book club, the reader misses the school bus that goes to their house. The reader is forced to take a short cut through a creepy part of town and stumbles upon a new comic-book shop called Milo's Comics Dungeon. The place is dusty, dingy, and really dark and Milo doesn't plan on ever letting the reader leave. There are two main choices when starting the book.

The reader decides to look at the comics upstairs. The reader is then sucked into them, finding out that they are stuck in the comic world. The reader finds out that a kid in their class, Wally, got sucked in. The reader then (using magic words) can go to the world of Ballistic Bug or Super Duper.

The reader decides to go downstairs through a door marked HORROR. They are then GLOMPFed downstairs into a maze where there are many more kids stuck down there and they want to escape from the monsters. They are then presented with two movements that decide where you go.

From choice A, in the world of Ballistic Bug, the reader can go to a new comic, Y's Guys. They are led to Professor Y who tells of aliens invading. This just leads to two bad endings involving death.

There are twenty-four bad endings, one ambiguous ending, and five good endings. 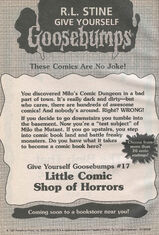 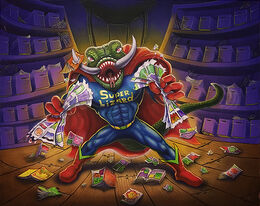