Let's Get Invisible! is the thirteenth episode of Season 2 of the Goosebumps TV series. The episodes aired on Fox during the Fox Kids block on November 2, 1996. It was directed by Ron Oliver.

Max and Noah discover a secret room in the attic with a mysterious mirror -a mirror with the power to make them invisible! When Max, Noah and their friends start experimenting with the mirror's power, they begin disappearing for longer and longer periods of time and find it's not so easy to come back. The spooky mirror is definitely not what it appears—or disappears—to be. . . . 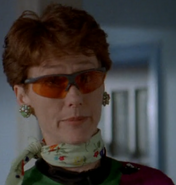 Mr. Thompson
Add a photo to this gallery

Add a photo to this gallery
Retrieved from "https://goosebumps.fandom.com/wiki/Let%27s_Get_Invisible!/TV_episode?oldid=133821"
Community content is available under CC-BY-SA unless otherwise noted.