Now you see him. Now you don’t.

Night of the Living Dummy
Let's Get Invisible! is the sixth book in the original Goosebumps book series. It was first published in 1993.

The original cover illustration features Max Thompson looking through a mirror in the attic. Half his body is invisible.

The Classic Goosebumps cover illustration features a boy whose head has vanished under the light of the mirror.

DISAPPEARANCES CAN BE DEADLY.

On Max's birthday, he finds a sort of magic mirror in the attic. It can make him become invisible. So Max and his friends start playing now you see me, now you don't. Until Max realizes that he's losing control. Staying invisible a little too long. Having a harder time coming back. Getting invisible is turning into a very dangerous game. The next time Max gets invisible, will it be... forever?

Max Thompson is hosting his birthday party at his home. Among the guests are Noah "Lefty" Thompson, Zack, Erin, and April. Noah is Max's brother, and he is called Lefty because he is left-handed. Zack is Max's best friend, and he has a strange hairstyle. Erin is a loud-voiced girl, while April is incredibly shy. The party is almost finished when Whitey, Max's dog, runs to the attic. While the kids look for him, they find a large, old mirror. Max pulls the chain of an overhead light. As soon as he does this, he disappears.

When the lights go out, Max reappears. His friends and brother insist that he became invisible, although he refuses to believe the group. That night, Max returns to the attic to inspect the mirror. Lefty joins Max on this exploration. Both boys want to make themselves invisible. The boys turn on the light and disappear. After ten minutes, they begin to feel weak. They turn off the light, but it takes slightly longer for them to become visible.

The next day, the group from the party reassembles at Max's house. Erin suggests that they hold a contest to see who can be invisible the longest. April, wanting to stay visible, chooses to time her friends. Before Lefty gets a chance to go invisible, his grandparents arrive for dinner. The kids decide to postpone the contest until another day. During dinner, Lefty gets up and leaves the table. A while later, Max sees a floating fork and deduces that Lefty made himself invisible.

That night, Erin calls Max by telephone. Erin tells Max to take the mirror to school for the science fair, but he refuses. Max goes to the attic and looks at his reflection in the mirror. He hears his name being whispered from the mirror, but isn't sure if it's coming from the mirror, or if he's imagining it. Frightened, Max runs back to his room and locks himself in until the next morning. When he wakes up, Max discovers that Lefty became invisible again. Max takes Lefty to the mirror to become visible again. Once visible again, Lefty begins acting strangely.

Deciding that the mirror could be dangerous, Max call his friends and cancels the contest. However, Zack, Erin, and April return to Max's house because Lefty agrees to revive the contest. When April decides to become invisible, Whitey also becomes invisible with her. Max quickly forces both of them to become visible again. During Erin's turn, Erin remains invisible for several minutes. When she becomes visible again, Max also notices that something has changed in her behavior.

Zack remains invisible for fifteen minutes. During this time, wants to leave the house and play a prank on a neighbor. Max runs to the attic and forces him to become visible again. Strangely, Max discovers that Zack's hairstyle has seemingly been reversed. When Max tries to ask him about his hair, Erin and Zack use the mirror to make him invisible. As the minutes roll by, Max begins to feel weak. He asks to be made visible again, but Zack and Erin don't pay attention to him. A haze appears, followed by a white light and a figure approaching Max; it's his own reflection!

Max's reflection tells him that Zack and Erin have been replaced by their reflections. Zack and Erin are now locked in the mirror. Before Max's reflection can swap places with him, the duplicates of Erin and Zack make Max visible again, assuming that the change has already been completed. Suddenly, Max's reflection appears in the mirror. He tells them that the real Max escaped. The duplicates of Erin and Zack try to make Max invisible again. Max flees the attic, but he is caught by the reflections. He asks April for help, but she is also caught.

Unexpectedly, Lefty enters the attic and breaks the mirror using a softball. The reflections are sucked into the mirror's pieces, and the real Erin and Zack are brought back into the real world.

Finally, Max and his brother decide to play catch. But to his horror, Max notices that Lefty is throwing with his right hand.

Some pieces of apparel used the back tagline from the book, however, they replaced the word "deadly" with "scary". 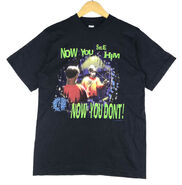 'Now You See Him Now You Don't' T-Shirt.

'Disappearances Can be Scary' T-shirt. 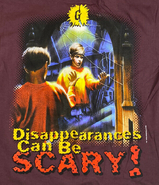 Let's Get Invisible! was adapted into an episode of the Goosebumps TV series, as the thirteenth episode of season two. The exclamation mark was omitted from the title. 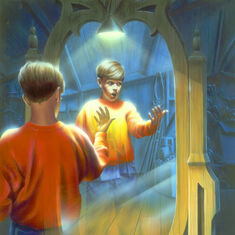 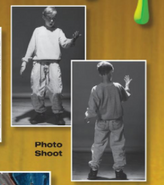 Photo shoot of the boy model for the cover's concept art.