Legend of the Lost Legend is the forty-seventh book in the original Goosebumps book series. It was first published in September of 1996.

The cover illustration shows the viking Ivanna with her right foot on a treasure chest.

Talk About a Horror Story!

Nobody loves a good story like Justin's dad. He's a famous writer and story collector. That's how Justin and his sister, Marissa, ended up in Brovania. Their dad is searching for an ancient manuscript called The Lost Legend. Justin and Marissa want to help. But instead of finding The Lost Legend, they get lost. And the woods of Brovania are filled with the strangest creatures. Like hundreds of squealing mice. Silver-colored dogs. And terrifying Vikings from long ago...

Justin Clarke and his sister, Marissa, are roaming the Antarctic tundra on a dogsled. The kids are looking for their father, an esteemed author, who is in search of the rare, blue sea lion. The kids fall off of their dog sled, and they see the blue sea lion. Suddenly, the ice beneath them breaks, and they begin floating out to sea.

However, this all revealed to be a part of a story that Justin and Marissa's father is telling. The siblings and their father are currently in the forests of Brovania, a small European country. Their father is searching for the Lost Legend, an incredibly rare and valuable document said to have been lost in Brovania and locked in a silver chest. The trio go to sleep in their tents, but Justin and Marissa are awoken by an animal howl. They go outside and find a large dog. The dog's collar has a note attached, which explains that the dog's name is Silverdog, and they should follow him. The kids try to wake their father, but they are unable to, so they decide to follow the dog alone. The dog eventually leads the kids to a small cabin in the middle of a clearing. Inside, the kids are met be a large woman named Ivanna.

Ivanna prepares some soup for the children, which they eat. Ivanna tells the kids that there will be a survival test that they must take in the morning, and they must take it in order to find the silver chest that they are seeking. A large, snarling creature — which Ivanna addresses as Luka — bursts in. Ivanna tells the kids that the creature was supposedly raised by wolves, and he will help the kids survive their test in the Fantasy Forest. The kids are instructed by Ivanna to rest.

When Justin awakes the next morning, he discovers that he's in the middle of a field. He finds Marissa, who had gotten up before him and done some exploring. Luka guides the kids down a path in the forest, and the kids find two empty backpacks, which they take. Luka begins chasing a squirrel, and the kids lose track of him. Justin finds a note from Ivanna in his pocket, and it says that the kids will be doomed if they lose Luka. The kids hear a cracking sound. They quickly learn that the orb-shaped items that they see lying on the forest floor are eggs, and all of them are hatching. From inside each egg crawls an angry mouse. The mice swarm the kids. Justin grabs one and discovers that the mice have switches on their backs that can be used to turn them off. The kids begin turning mice off. Justin tosses a few of the inanimate mice into his backpack.

The kids run onward. A tree falls on Marissa, but she isn't hurt. It turns out that the tree is fake. Justin deduces that all of the trees are fake, and the siblings knock over multiple trees. When Marissa knocks over a tree, bats fly off of it and attack the kids. The duo hears thunderous footsteps approaching. The siblings run away from the noise. They find a stream and try to cross. While in the creek, Justin finally sees the source of the thunderous footsteps: two giant, black cats. Each cat pulls one of the kids out of the water and bats them around, and the kids guess that the cats are preparing to eat them. Justin uses some of the mechanical mice from his backpack to distract the cats, and the siblings are able to escape.

The duo keeps running. They find Ivanna's cabin and go inside. Inside, they find Ivanna slumped over the table. While inspecting her, the siblings discover a wind-up key in Ivanna's back. Luka appears, walking on two legs, unlike before. Luka talks to the children, and he congratulates them for passing the test. Luka peels the fake fur off of his body and reveals that he built Ivanna and all of the other creatures in the Fantasy Forest. He and his family have protected the forest's treasure for many years. Luka gives Justin a silver chest with the duo's reward inside. Luka is instructed to follow SIlverdog back to their campsite.

While following the dog, the siblings run into their father, and Justin presents the silver chest to him. When the trio opens the chest, they find a large egg inside. Silverdog reappears, and Justin asks the dog to take them back to Luka, which the dog does. Luka is surprised that the family doesn't want the Eternal Egg of Truth, but they explain that they would prefer the Lost Legend. Luka takes back the egg, and he says he can direct the trio to the people who possess the document but mentions they probably won't be willing to part with it.

The trio finds the camp where the owners of the Lost Legend reside. Mr. Clarke asks for the legend, and the current owners of the document give it to the trio. The entire camp of people abruptly pack up their tents and leave. Mr. Clarke begins reading the manuscript. The first words of the document say, "WHOEVER OWNS THE LOST LEGEND WILL BE LOST FOREVER." Suddenly, Mr. Clarke realizes that he doesn't know where they are. 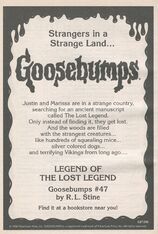 Book advertisement from How to Kill a Monster. 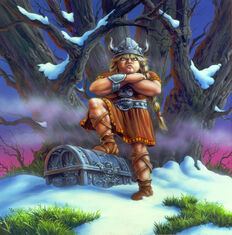 Cover and Curly Metallic Stickers
Add a photo to this gallery

Retrieved from "https://goosebumps.fandom.com/wiki/Legend_of_the_Lost_Legend?oldid=124336"
Community content is available under CC-BY-SA unless otherwise noted.