King of the Wimps (episode)

Larry Boyd is the protagonist of the twenty-sixth Goosebumps book, My Hairiest Adventure, and its television adaptation.

On a cold winter day, Larry and his friends find a bottle of Insta-Tan in the dumpster, and they decide to try some on. A few hours later, Larry begins growing coarse black hair on the backs of his hands, his forehead, and his knees. He shaves the hair off, but the hair keeps coming back. Larry's friends disappear, and he discovers dogs that  resemble his friends. Later, Larry turns into a dog himself. It is revealed that the tanning lotion had nothing to do with Larry's transformation. Larry and his friends were always dogs, but they were turned into humans by Dr. Murkin in an experiment. The serum Dr. Murkin developed to keep Larry and the other kids human was not very effective on dogs, and the kids reverted back to their original forms.

Larry is twelve years old and Caucasian with blond hair and brown eyes. He is featured on the cover of the book, in which he has "perfect" wavy hair and big ears.

Larry as depicted on the UK cover of My Hairiest Adventure. 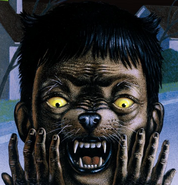 Larry as depicted on the French cover of My Hairiest Adventure.
Add a photo to this gallery

Larry in his dog form.

Larry growing hair all over his body.

Larry sees hair on his left arm.
Add a photo to this gallery
Retrieved from "https://goosebumps.fandom.com/wiki/Larry_Boyd?oldid=135887"
Community content is available under CC-BY-SA unless otherwise noted.