Light blond (comic)
Black (book/concept art)
Keith is the antagonist of the sixty-first Goosebumps book, I Live in Your Basement!.

After Marco was hit on the head during softball, Marco got a call from Keith. He told Marco he wants him to be okay, so that he can take care of him, and that he lives in Marco's basement. Keith continued to call for him but whenever Marco tried to tell anyone about him, he would vanish. Even after it was revealed that Marco was only dreaming that he had been knocked out by Gwynnie, Keith was still there. He claimed that he had putting himself in Marco's dreams, but he was all real. He told Marco that he was going to take care of him for the rest of his life.

Eventually Marco gave up and agreed to be his slave. However, it was then revealed that everything was all Keith's dream. While Keith does live in Marco's basement, he lives there with his mother and she did not allow him to interact with humans. Keith had disobeyed her and played baseball with the humans, leading to Marco hitting him on the head. Soon after waking up from his dream, Marco appeared in the basement. Keith tried to lie and tell Marco he's dreaming this. It is unknown if Marco believed him.

Keith first appeared in the hospital, introducing himself to Mitra Salar and telling her he is waiting for her so she can take care of him. When she left, she saw him throwing up weird gunk. Later, after getting rid of a mysterious evil phone, she and her brother Mehrdad arrived home to find her mother asking them to get "their brother." They discover Keith in the basement, who revealed that he was the one who sent the phone. He told her that he can solve all her problems, as long as she takes care of him.

In his original form, Keith looks like a yellow blob of human organs connected by webs of purple veins. In human form, he has wavy black hair with a thin, serious face and round dark eyes.

In Download and Die!, Keith's eyes are pale cyan and his hair is light blond. In the concept art, his hair was black like in his original appearance.

Keith can go into Marco's dreams and change his mind. It is implied that Keith can shape-shift into a human being, though this has only been demonstrated in Download and Die!.

Concept art of human Keith for Download and Die!.

Concept closeup of human Keith for Download and Die!. 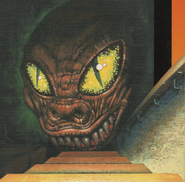 Keith as depicted on the French cover of I Live in Your Basement!