Corinne Conley
Kathryn is a supporting character in the third Goosebumps book, Monster Blood, and its television adaptation. She is the great-aunt of Evan Ross.

For over twenty years, Kathryn has been the slave of Sarabeth, a witch disguised as her pet black cat. Sarabeth took away Kathryn's hearing and refused to let her learn sign language to make her more dependent on Sarabeth.

Kathryn's family and loved ones thought that she was just eccentric and mean, but Kathryn was actually hiding the secret of Sarabeth from everyone. When her great-nephew, Evan Ross, comes to stay with her for a few weeks, Sarabeth gets angry and forces Kathryn to curse Evan's new toy: a can of Monster Blood. Kathryn rebels against Sarabeth quietly by whispering to Evan to be careful after she curses the Monster Blood.

Kathryn's cursing of the Monster Blood, spell books in the room she set up for Evan, and a bone she wears around her neck leads Evan to believe that Kathryn is a witch. He assumes Kathryn is responsible for trying to harm him with the Monster Blood before the truth about Sarabeth is revealed. Kathryn then apologizes to Evan for not believing him about the Monster Blood.

After Sarabeth is consumed by the Monster Blood and disappears, Kathryn regains her hearing.

Kathryn is described as a large woman with "startling" black hair and steely blue eyes. Evan says that Kathryn's hair makes her look younger than her age of eighty. She wears a dangling bone around her neck. However, in the television series, she has gray hair. 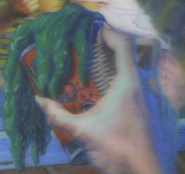 Kathryn's hand holding a can of monster blood as depicted on the first printing of the Dutch cover of Monster Blood.
Community content is available under CC-BY-SA unless otherwise noted.
Advertisement