Katharine Isabelle
Katrina "Kat" Merton is the protagonist of the thirtieth Goosebumps book, It Came from Beneath the Sink!, and its accompanying television adaption. She is the older sister of Daniel Merton.

The Merton family has moved to a new house, and their dog find a sponge-like creature beneath the sink. Quickly, the small monster begins causing bad luck for the Merton household.

Through a book that Daniel shows her, Kat learns that the creature is called a Grool, and it feeds on the bad luck of others. The book doesn't say much about how to defeat the creature. The book says that giving the creature away will cause its owner to die within twenty-four hours. It also mentions that the Grool has a more dangerous cousin, the Lanx, which looks like a potato with teeth.

Kat spends a long time witnessing bad luck and trying to figure out how to defeat the creature. For instance, the family dog, Killer, runs away. Katrina tries smashing the Grool and throwing it in the garbage disposal, but neither of these things destroy the creature. Finally, Kat begins singing sweetly to the Grool, coos at it, cradles it, and kisses it. The Grool shrinks, slumping lifeless and defeated.

Soon thereafter, Killer returns. Later in the day, Katrina notices that Killer is carrying something. The dog is holding an item that looks like a potato with fangs, which matches the description of the Lanx.

Katrina is resourceful and determined. Additionally, she's very fond of the colors pink and purple.

In the book, Katrina is described as having "reddish" hair. She is also is tall and thin, with many freckles upon her face. She usually wears her hair in a ponytail, and she frequently wears pink and purple. 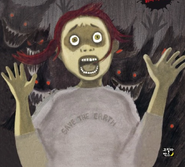 Kat as depicted on the Korean cover of It Came from Beneath the Sink!.
Community content is available under CC-BY-SA unless otherwise noted.