Karl Knave is the main antagonist of the three part Goosebumps episode, "Chillogy".

Karl is the mayor of the model town of Karlsville and is a sadistic, megalomaniacal man who likes to make the wishes of children come true, with a sick twist added, of course. The first girl, Jessica, a con artist who always is interested in making more money, is offered a chance to sell the best lemonade ever made on a hot day in Karlsville. Before Karl leaves Jessica in charge of the stand, Karl warns Jessica to not get greedy with product's servings and price. Afterwards, Karl leaves and gradually increases the temperature of Karlsville to draw in the hot townsfolk to Jessica's stand. As more citizens pass by and buy the lemonade, they remark the remarkable taste and quality of the lemonade before saying that it's more valuable than what it's already priced.

Noticing the citizen's satisfaction and awe, Jessica sees the opportunity of earning more profit and jacks up the prices while halving the servings. The plan goes off without a hitch as the townspeople pay whatever she demands because they can't get enough of the lemonade. Things seem to be going well for Jessica's business, but she gets too greedy and further attempts to swindled the townsfolk by lying that there is only one glass left, forcing them to bid for it. However, she backs up and ends up accidentally spilling the rest of the hidden pitcher and the angry townsfolk call her a "greedy little pig". Karl literally transforms her into a pig and she barely escapes the rioting citizens of Karlsville.

In the second installment of Chillogy, Matthew is sucked into Karlsville where he lives out his dream of being a pro baseball player, only to be placed inside a baseball game run by monsters and living, carnivorous equipment. Matthew escapes as well

In the third installment of Chillogy, Matthew's young brother gets lured into the town by a mail scam, where he is about to be turned into plastic. Matthew and Jessica arrive and save him from his grim fate, and narrowly escape Karlsville when Matthew's mother inadvertently vacuums up the dolls from the town, including Karl. However, it is revealed that Karl survived as he crawls out of the vacuum. 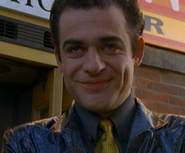