Half human. Half beast.

Jekyll and Heidi is the fourteenth book in the Goosebumps Series 2000 book series. It was published in 1999.

The cover artwork shows Heidi Davidson looking at a humanoid creature in her uncle's lab. Chemicals and glass can be seen on the ground.

A young girl named Heidi is riding a bus heading towards Vermont due to the recent deaths of her parents who have died in a horrible car accident. Upon getting off in the tiny village bus station, she finds herself without an escort. Her uncle, a scientist named Dr. Palmer Jekyll was supposed to pick her up, but she can't seem to find him anywhere.

As she waits, a few birds scare her, but she soon comes across a very cute boy. She begins to chat with him as she waits for her uncle. The boy, Aaron, usually comes by to kill time, as his mother works in the bus stop's cafe. And so, he begins to fill Heidi in on some stuff about this town such as a horrible beast that is stalking the village at night. The towns people know her uncle is to blame, but Heidi does not think so.

Soon, she becomes tired of waiting and decides she will just go to her uncle's mansion herself. She trudges up the snowy hill mountain only to be greeted by her bitter cousin Marianne who tries to make her leave. Heidi's uncle however is very pleased and happy to see Heidi at the door. He apologizes for not coming to pick her up since he was too caught up in an experiment and accidentally forgot. And so, over the course of time, Heidi is beginning to learn more about the beast and the tension between the village and her Uncle Jekyll. One time, she even sees the beast wreak a path of destruction from a bird's eye view, as her bedroom overlooks the entire little town.

Upon seeing her uncle return from a walk covered in dirt, she is beginning to become suspicious that the towns people may indeed be right. So she decides she will spy on him and eventually witnesses him downing several concoctions in the lab! She tries to escape but he confronts her and locks her in her bedroom for her own good. But Heidi shimmies down a nearby drain pipe to stop the beast's destruction. She then runs into the beast, but Aaron attempts to protect his friend. The beast merely throws the boy into a fire. But Aaron survives and lives just fine, minus some burns.

As the villagers arrive, Dr. Jekyll leads Marianne and Heidi down below into the basement, where there is a secret tunnel leading away from town. The three get halfway down, when Heidi remembers an old diary she has found in her bedroom. She insists that the old artifact is worth saving and abandons her family to go brave the bunch of angry villagers and retrieves it. She then easily sneaks past the villagers who are busy burning and breaking things. But once they do finish they angrily give chase!

Luckily, a remarkably well-healed Aaron shows up to rescue her and the two escape downstairs. But when Heidi tries to find her family, she sees both her uncle and cousin have already left. Never to be seen again...

Now safe at Aaron's house, Heidi begins reading from the old journal, only to discover it contains modern writing. Apparently Marianne liked the vintage journal and began charting her transformations within it. Heidi reads through the pages until she reaches the end and reads the entry about how one night Marianne bit her while she slept. Aaron then asks why she looks so scared and strange. 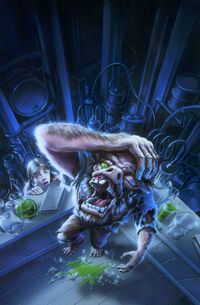 Retrieved from "https://goosebumps.fandom.com/wiki/Jekyll_and_Heidi?oldid=90867"
Community content is available under CC-BY-SA unless otherwise noted.