Goosebumps Wiki
Register
Don't have an account?
Sign In
Advertisement
in: Books, Real Life, Covers by Tim Jacobus,
and 13 more

It Came from Ohio!

It Came from Ohio!

1998: The real deal on the author of Goosebumps.

2015: The life story of the author of Goosebumps.

Joe Arthur
Susan Lurie (Only contributed to the 2015 reprint.)

It Came from Ohio! is the autobiography of R.L. Stine about how he came to be a writer. It talks about his childhood, his life in college, his early jobs, his wife, and how he came up with the ideas for Fear Street and Goosebumps.

It was originally published in 1998, with some versions featuring a holographic cover. The book was rereleased on April 28, 2015 as a tie-in to the film Goosebumps. It contained new information not seen in the original, such as three new chapters and the top 20 most asked questions being updated.

Has He Had a HORRIFYING Life?

All of your questions about best-selling your favorite author are answering in this STINE-TINGLING life story! For the first time ever, RL Stine reveals what he was like when he was YOUR age--and what his scary life is like TODAY!

PLUS: Private snapshots and photos from his family album!

The 1998 cover (illustrated by Tim Jacobus) features R.L. Stine sitting and typing at his computer. He is surrounded by Slappy, Cuddles the Hamster, Lawn Gnomes, Monster Blood, Amaz-O the rabbit, Curly the Skeleton, Drool, The Mummy, a Scarecrow, The Ghost of Harrison Sadler, The Swamp Monster, The Abominable Snowman, and The Shrunken Head. The 1997 hardcover book features this illustration as a lenticular image, switching between an image of R.L. Stine sitting by himself and the complete image with Stine surrounded by monsters. The 1998 cover features just the still image.

The 2015 cover (illustrated by Brandon Dorman) features R.L. Stine sitting at his computer writing, surrounded by Slappy, A lawn gnome, Fifi the Vampire Poodle, a mummy, a scarecrow, The Haunted Mask, Monster Blood, and the Abominable Snowman.

R.L. Stine is sitting in a large chair surrounding by a giant praying mantis, a Beast, a Mummy, Slappy, Sarabeth, The Blob, Amaz-O and Dr. Fritz Fredericks. 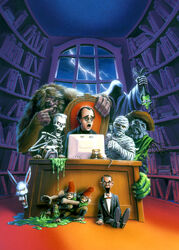 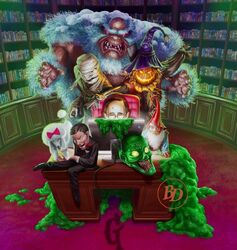 Ad for the original hardback from book #54.