Night of the Living Dummy II
It Came from Beneath the Sink! is the thirtieth book in the original Goosebumps book series. It was first published in 1995.

The cover illustration shows the Grool looking out from underneath the kitchen sink.

THEIR LUCK'S ABOUT TO GO DOWN THE DRAIN...

Kat and her brother, Daniel, are so lucky. They just moved to a new house with tons of rooms, two balconies, and a lawn the size of a football field! But all that good luck is about to run out. Because there's something really evil living in their new house. Something that's moving. Watching. Waiting. Something that comes from beneath the kitchen sink...

Katrina "Kat" Merton and her family have moved to a new house. As the family begins moving in, their dog, Killer, noses through a cabinet beneath the sink. He uncovers a sponge, and Kat inspects it, soon realizing that it's moving. Kat and her brother, Daniel, begin fighting for ownership of the creature, and their mother has to break up the fight. Kat sees that the sponge has eyes, and she goes to show her father. Mr. Merton is doing some repairs on a ladder, and when he glances at the sponge, he falls down. Afterwards, Kat is accused of pushing her father.

Noticing that the sponge has caused multiple problems, Kat goes outside and throws the creature in the trash, but Daniel recovers it. Kat searches an encyclopedia, hoping for answers. The book says that sponges can't live outside of water for very long, meaning that Kat's creature isn't a sea sponge. The siblings show the creature to their friend, Carlo. He is fascinated by it and wants to research the creature. However, Carlo accidentally steps on a nail and injures his foot.

The next day, Kat puts the sponge in a container and takes it to school. As Kat walks outside, she's almost hit by a falling tree branch, but Daniel pushes her out of the way. At school, Kat tries to show her teacher the sponge, but the sponge remains completely still. After this, Kat's teacher injures her hand in a desk. Once class has ended, Daniel runs up to Kat. He shows Kat a book called Encyclopedia of the Weird, and the book says the creature is a Grool. Grools are mythical creatures that thrive on bad luck. Once someone finds a Grool, it can't be given away — or else the owner will die within one day. The Grool is also closely related to a creature called the Lanx, a potato-like creature with fangs, which is reportedly much more dangerous. Kat gives the book back to her brother, dismissing it as nonsense. When Kat and Daniel get home, their mom tells them that Killer has run off.

The next day is Kat's birthday. She had planned to have a party at a water park, but it has to be canceled due to a storm. Upset with the Grool's bad luck, Kat and her brother bury the creature outside. The siblings go back inside, and Kat is presented with a birthday cake. The following morning, Kat notices that all of the plants in her yard are dead. She decides that she needs to dig up the creature, which she does. Upset, Kat slams the creature with a schoolbook. The creature returns to form quickly after being smashed. Some time passes, and Kat realizes that the Grool has gone missing. Daniel says that he let Carlo borrow the creature to study. Kat remembers that giving away the Grool can be dangerous, so she and Daniel search for Carlo. The siblings find Carlo, lying o the ground, having crashed his bike while riding the Grool home.

The kids look for the Grool, but they don't see it anywhere. Carlo suggests that some kids may have stolen the Grool when he wasn't paying attention. Kat, Daniel, and Carlo to the playground, and they find some boys playing with the Grool. One boy ends up getting hit in the head with a baseball, and the boy who's holding the sponge tosses it to Kat as he rushes to check on his friend. Kat and her brother travel home. Kat tries to destroy the Grool by dropping it in the sink and turning on the garbage disposal, but the creature fights its way back out of the drain. Daniel retrieves the book that he had used to initially identify the Grool, hoping to find more information, but he doesn't learn anything. According to the book, the creature can't be killed by violent means. Suddenly, Katrina has an idea. She begins singing sweetly to the Grool, cuddling it. The Grool begins to shrink, slumping lifeless and defeated.

Soon thereafter, Killer returns. Even the house's yard looks healthier. The kids, wanting to celebrate, go out for ice cream. When they get back, they notices that Killer is carrying something. The dog is holding an item that looks like a potato with fangs, which matches the description of the Lanx. 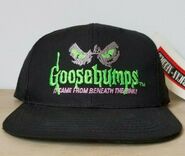 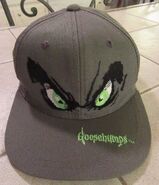 Cap with eyes only.

Greeting Card (front)
It Came from Beneath the Sink...

Greeting Card (inside)
...To wish you a HAPPY (And Lucky, heh, heh, heh) HALLOWEEN!

It Came from Beneath the Sink! was adapted into an episode of the Goosebumps TV series. It is the fourteenth episode of season one. The title omits the exclamation mark from the book title. 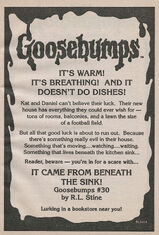 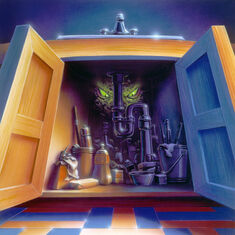