Goosebumps Wiki
Register
Don't have an account?
Sign In
Advertisement
in: Books, Give Yourself Goosebumps, Dreams,
and 11 more

It's Only a Nightmare!

It's Only a Nightmare!

The Werewolf of Twisted Tree Lodge

It Came from the Internet
It's Only a Nightmare! is the thirty-second book in the Give Yourself Goosebumps series. It was published in 1998.

The cover illustration depicts a bed with gargoyle-like figures on the bedposts in front of a window with lightning flashing outside. A strange blue creature with the words "Sleep Master" embroidered on its night cap was in the bed under the quilt. The creature's left hand is slightly transparent, and gripping the quilt.

You know it's silly — but you're creeped out by the weird old inn where your family is staying. You're even afraid to go to sleep! Dumb, right?

Wrong. You should be afraid. Because in this place sleep is when the evil Sleep Master rules. And your nightmares become reality.

Like the one where you turn into a bat. Or the one where your parents become hideous aliens. Can you escape? And can you survive the ultimate showdown—with Lord Morphos the terrifying ruler of the Dream World?

You are in a hallway being followed by something. Then you are suddenly on a roof, and you fall off trying to escape. When you suddenly wake up from this dream, you soon remember that you're staying in an inn with your parents, who are in the other room asleep. They like the inn, while you are finding it beyond creepy. As you start to try to relax and get back to sleep you hear a sound, and then turn to see an actual gargoyle in the room.

It turns out to instead have been a decoration on the headboard of your bed. You soon believe it was the decorations that caused you to have a nightmare. You sit up, trying to think about the nightmares you have had since you came to this inn. Many of which involve the same character called "The Sleep Master." Every time you've encountered him, he has said the same thing, "Wake up! Your whole life is a dream. What you call the dream world is reality. Wake up and live it!" Which leads you to wonder if you'll get any sleep while in this place and you decide to try to find a way to relax yourself...

You decide to go downstairs and spy an old bookcase in the nearby room and decide that maybe reading a book would help you sleep. While searching the bookcase you notice one of the books titled "Dr. Morphos' Sleep Remedies" and you decide to read it. You assume it is too old to be of any use but then decide to try it anyway. Soon you also notice a warning near the top of the page, but you decide to try it out despite the warning and soon you find yourself asleep...

You realize your in a dream as you fly around and soar around in the air! Things are going fine... until you eat a moth and realize you turned into a bat! You head to a cave while trying to figure out exactly why you lost control of your dream. The sleep master appears and you try to escape! Throughout this dream you alternate between various forms while trying to escape the dream master to escape to the real world.

You decide to stay in bed and to calm down you keep telling yourself that the gargoyles are not real. Only for one to insist it is real! At first your scared but then force yourself to speak to it anyway. They tell you that you are in a dream, which calms you down until realizing you would rather be awake instead, so that you may fall back to sleep and have a nicer dream. One of the gargoyles then stops you from trying to wake up and tells you that there is a secret to this bed that allows you to choose what you dream about, and it will come true.

It also warns you to be careful, for that very reason but you assume that this is just part of the dream. But at the same time you are highly curious. So you decide to try it out and choose what to dream about. But you must remember at all times to keep calm and make sure the dreams do not get out of control since the dream is real and they are still not completely under your control...

In Story A, instead of trying to escape the Sleep Master you decide to confront him and listen to what he has to say. He begins to tell you of how he began as an ordinary child from the real world until he fell asleep and became the Sleep Master. He is unable to return to the real world because of the ruler of the Dream World: Lord Morphos. Who is not allowing him due to trapping people while they dream in order to keep them there.

The Sleep Master then tells you that you may be able to escape, if you can defeat Lord Morphos. Which of course, is way easier said then done considering he can manipulate the dream world whenever he pleases...

There are thirty-three bad endings and seven good endings. 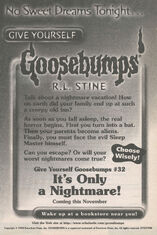 Book advertisement from The Werewolf of Twisted Tree Lodge. 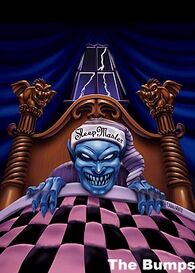 Cover artwork by Craig White; originally shared to The Bumps.