Goosebumps Wiki
Register
Don't have an account?
Sign In
Advertisement
in: Books, Robots (topic), Books released in 2019,
and 14 more

The Dummy Meets the Mummy!
It's Alive! It's Alive! is the seventh book in the Goosebumps SlappyWorld book series. It was published in 2019.[1]

Livvy Jones and Gates Warwas are done being losers. Every year they get beat at the Springdale Robots Meet by their rival school's team. But this year they have a new strategy. And a new robot. Her name is Francine. And she looks like a real person. Maybe a little too real. When Francine malfunctions in creepy ways, Livvy gets paranoid. How could a robot do something she wasn't programmed to do? Is it sabotage? Or something more sinister?

Livvy Jones and her friend Gates Warwas are part of the Robotics team, and have built a lifelike girl robot named Francine. Gates think it's weird that they made their robot look lifelike while all the other robots people made look like machines but Livvy insists on making Francine this way.

When they get to Livvy's house one day, they discover that Francine is gone but she's just been taken by Chaz Fermont, a kid from the rival school's robotics team. He starts bragging about how much more advanced his robot is, which makes Livvy brag about how Francine can make an omelet. When they turn Francine on, she grabs Chaz's hand and squeezes it hard. They swear that Francine was not programmed to do that. Chaz leaves and they still want to try out Francine's omelet making skills, but she goes haywire and starts breaking the eggs.

Later, Livvy's parents, who are programmers, inspect Francine and say it seems like she was programmed to toss eggs and smash them on people, but Livvy swears that isn't the case. That night, Francine appears in front of her room and her parents think Livvy did it. The next day during a robots club meeting, they try to show off Francine but all she does is make a "pffft" sound. Later that day, Livvy's parents check Francine again and say that they didn't find any programming inside her when they inspected the robot.

The following day, Livvy visits Chaz and accuses him of messing with Francine. He denies it and then Francine gets out of control and stomps his foot, then destroys Chaz's bot. The robotoics team has a meeting to discussing Francine's programming issues, and the kids are disqualified. Livvy's parents take Francine down to their lab to see what is really going on with her. After an hour, Livvy and Gates go down there and find mom working on some wires that are sticking out of dad's neck.

They tell their housekeeper Mrs. Bernard about this and she before can say if she knew all along or not, Livvy's parents appear. They tell them what they saw and they laugh it off, and just say that Livvy only thinks she saw that. They allow Livvy to check dad for wires and she doesn't find anything.

During dinner, she asks about Francine and they say they found nothing wrong with her so they have no idea what is going on. After school the next day, Livvy's dad accidentally cuts himself while making dinner, but he doesn't bleed. That night, Livvy plans to inspect her parent's lab but she bumps into Francine, who has somehow been put back together. Francine starts talking but before Livvy can hear more, her parents appear and take Francine away, thinking Livvy had put her back together.

The next day after school, Livvy and Gates finally inspect her parent's lab to found out what is going on. They discover dad with his head on a nearby table, as mom is sticking a cable in her own neck. Suddenly, Mrs. B storms in and screams that her "bots need more time!". She reveals that Livvy's parents were robots that she created to prove robots can take over for humans. She was also the one who programmed Francine to go out of control.

The kids escape and call the police, who quickly show up to investigate their claims. But when they drag the cop inside the house, Livvy's parents are acting normal and tell them nothing is wrong. The police leave and Mrs. B tells the robot parents to finish off the kids. Livvy then notices a white desk in dad's ear and takes it off, and he does the same to mom. This makes them start acting normal and they stop attacking the kids.

Dad rips off Mrs. B's head, revealing that she is a robot. Mom and Dad explain that Mrs. B had been built to help around the house, but they gave her too much intelligence, causing her to get out of control. The robot parents the kids saw were just doubles that Mrs. B had built and she used the white disks to control the human parents.

That Saturday, the kids re-enter the robotics competition as they figured out what is wrong with Francine and have her under control. When it's their turn, Francine steps away and stomps on Chaz's foot. She then announces that she has locked all the doors and that she must be listened to, or people will get hurt. 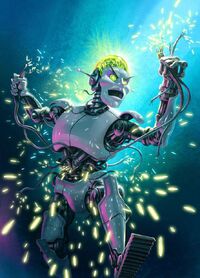