Talk about a tight squeeze!

The cover illustration shows a Body Squeezer holding a body as a dog is trying to bite into it. This is actually half of the whole image. The other half is used as cover for the second part of the story.

Jack Archer is constantly being tormented by his younger sister Billie Archer, who is seven years old. Billie is always competing with Jack. She loves being "the first, the best, the fastest!" While the siblings are watching TV, their show is interrupted by a news bulletin. They are informed that an unknown object has entered Earth's orbit, and NASA scientists are unable to identify the object. Jack hopes that the object might be a comet. After the broadcast has concluded, Jack decides to spy on his neighbor, Mr. Fleshman. Mr. Fleshman is described as having gray hair and gray-green eyes. Jack uses binoculars to gaze into Mr. Fleshman's house. Once, Jack saw a creature lurking in Mr. Fleshman's house. While Jack is spying, an object falls out of the sky, bounces on his head, and falls into Mr. Fleshman's backyard. It is revealed that the object was only gold colored rubber ball, similar in size to a soccer ball. Jack is then met by several of his friends; Maddy Wiener, Marsha James, Derek Lee and Henry Glover. They are the kids that threw the ball at Jack's head.

A day later, scientists are still no closer to finding any information on the comet. Jack suspects that Mr. Fleshman is an alien. While Jack is listening to the news, he learns that the U.S. Air Force has been ordered to perform twenty-four-hour sky watches. The people on the news say that the object is not a UFO, but Jack is almost certain it is. At one point in the day, Mr. Fleshman tells Jake to keep quiet about everything that he knew.

Jack thinks that he sees a monster standing in Mr. Fleshman's house once again. Jack decides to climb through Mr. Fleshman's unlocked window while Mr. Fleshman is away. Jack realizes that the 'monster' he saw was only a monster on a movie poster that was hanging on a wall. While exploring, Jack finds a photo album filled with pictures of green creatures. Jack also finds machines and test tubes. Out of nowhere, a ghost accumulates. Once again, Jack is confronted by Mr. Fleshman. Mr. Fleshman explains that the strange things in his house are special effects for movies; the ghost was only a projection. Mr. Fleshman even owned a remote controlled robot-monsters. The photographs of the green creatures supposedly came from an unreleased movie. While he was in Mr. Fleshman's house, Jack had picked up a small metal object and kept it in his pocket accidentally.

Late at night, Jack is inspecting the small metal square that he had stolen. Jack then begins hearing strange voices. The voices are small, tinny, and sound like they are fading in and out of static. The next morning when Jack's mom wakes him up for school, he begins acting very strange saying "I am ready!", "I will obey!" And "I will be prepared!" Jack seemingly can't control the strange things that he says.

Whenever Jack receives a command from his mom, he compulsively replies with more odd responses. Eventually, Jack manages to get to school. The voices in his head grow worse; they command him to leave school, but he ignores them. While in art class, Jack freaks out after seeing a sculpture of a ball. Under the command of the voices, he shouts at his teacher. He tells her that aliens are coming from another planet to invade Earth. The teacher takes him to the school nurse.

Back at his house, Jack's parents are very worried when they find out about the voices in Jack's head. Jack runs off to go return the metal box to Mr. Fleshman. When Jack gives the metal box back to Mr. Fleshman, he tells Jack that the device was only a beeper. Jack leaves Mr. Fleshman's house, but while he is riding his bike home Jack hears a whistling sound, he looks up and sees a blinding bright orange fireball that kills him. Well, he isn't actually dead, but the thought he was for a few seconds. Jack then realizes that he is alive, and sees the fireball laying on Mr. Fleshman's driveway. Jack inspects the object, and he finds that it is a sphere shaped meteorite. Jack takes the rock home with him. Much to his dismay, he notices that he is still able to hear voices in his head. The voices want him to prepare for an impending invasion.

The next day Jack takes his meteorite to school to show his science teacher. Before his teacher can inspect the meteorite, his friends take it and toss it back and forth. One of his friends accidentally throws the rock through an open window. The voices in Jack's head tell him to jump out of the window (which is five stories high). Instead of jumping, he runs all the way outside. Jack obeys the voices in his head, retrieves his rock, ditches school, and runs home. His parents aren't home when he gets there.

With no other options, Jack must go to Mr. Fleshman for help. Jack goes to Mr. Fleshman's house and hears him talking on the phone. Mr. Fleshman is talking to someone who he addresses as General. Mr. Fleshman tells the General that he lost his 'communicator' for a few days, and Jack assumes that the beeper that he returned was actually an alien communication device. Mr. Fleshman talks about the upcoming invasion. He says that his enemies don't stand a chance.

Jack deduces that Mr. Fleshman must work for the government. Jack rushes back to his house and runs to his bedroom. He notices that his meteorite is moving and glowing bright green. The meteorite cracks open, revealing a small lizard, about the size of a grasshopper. The lizard begins growing quickly. It transforms into a huge green alien in seconds. Right as the alien begins to reach toward Jack, the reader is met with a message: TO BE CONTINUED. 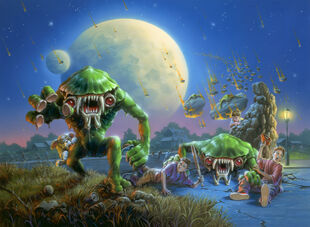 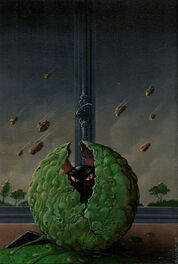 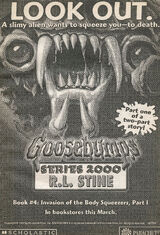