Invaders from the Big Screen

You're Plant Food!
Invaders from the Big Screen is the twenty-ninth book in the Give Yourself Goosebumps gamebook series. It was published in 1998.

The cover illustration consists of a huge, brown gorilla emerging from a movie screen and reaching for a horrified audience in a movie theater.

Your friend Laura gets a little freaked out by horror movies. But you tell her to just cover her eyes if she gets scared. After all, it’s only a movie, right?

Wrong! If you watch "Going Ape in Blastovision," a giant ape will reach through the screen and pull you into the movie! If you watch "Agent Z vs. Dr. Aqua," you'll find yourself swimming with half-alligator mutants. And if you decide to see "House of a Hundred Horrors," you could be counting your last hours on earth!

There are twenty-two bad endings, one ambiguous ending, and four good endings. 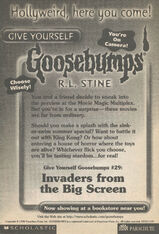 Book advertisement from Night of a Thousand Claws. 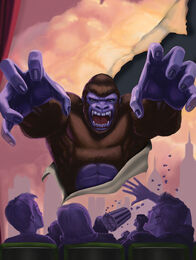 Retrieved from "https://goosebumps.fandom.com/wiki/Invaders_from_the_Big_Screen?oldid=148174"
Community content is available under CC-BY-SA unless otherwise noted.