Into the Twister of Terror

Into the Twister of Terror is the thirty-eighth book in the Give Yourself Goosebumps series. It was published in 1999.

The cover illustration depicts a twister tornado rampaging through the suburb streets. The twister had picked up a bunch of debris, including a doghouse with the name "Tito" on its front, while a pug dog is in the foreground, giving a look of fright to the reader.

The sky is dark. The windows are rattling. And your aunt and uncle are yelling "TWISTER!" as they run for the storm cellar. Yikes! You better find someplace to hide, too!

If you head for the storeroom, you might find yourself on a magic carpet ride — to nowhere! If you decide to follow your dog, Yoyo, you discover that animals can talk during tornadoes. Too bad they're talking about making a meal out of you!

You live on a farm with your elderly aunt and uncle and their dog Yoyo, in an area prone to natural disasters. There is a tornado and you do not get into the storm cellar quickly enough. You are swept into the twister, which heads towards your house. You must then decide whether to try to help your aunt and uncle; or follow Yoyo, who appears to be trying to tell you something.

You decide to go for help, and subsequently meet a girl named Wendy. The main storyline of this section involves trying to appease a wind spirit that Wendy has disturbed.

You follow Yoyo, who soon reveals that he can talk. You and him try to find your aunt and uncle together, but you face a series of dangers along the way.

From story A, you encounter Spin and Sally, a pair of scientists who have created a machine that can travel inside the storm. They promise to help you find your aunt and uncle, but you soon learn they are dangerous and planning to use the twister to hold the town to ransom.

There are twenty-six bad endings and eight good endings. 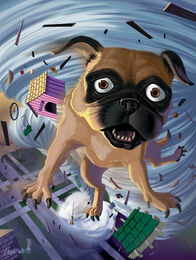 Retrieved from "https://goosebumps.fandom.com/wiki/Into_the_Twister_of_Terror?oldid=133414"
Community content is available under CC-BY-SA unless otherwise noted.