Talk about a MONSTER nightmare!

Monster Blood IV
I Live in Your Basement! is the sixty-first book in the original Goosebumps book series. It was published in 1997.

The cover illustration shows Keith in his monster form in the basement.

HE'S GOT THE BASEMENT BLUES!

"Don't do this! Watch out for that!" Marco's mom thinks the whole world is a danger zone. She won't even let Marco play softball. But Marco wants to have fun. So he sneaks off to a game. And that's when it happens. He gets hit in the head with a baseball bat. Now things are getting really fuzzy. Really scary. Because when Marco gets home, he gets the strangest call. From someone who says he lives in Marco's basement...

Marco's mother is annoyingly overprotective. Since his mom doesn't want him playing softball, Marco has to sneak to the local softball diamond in order to play with his friends. Before a game can start, Marco is accidentally hit in the head by the athletic Gwynnie Evans while she is taking a practice swing. Marco is knocked out. He wakes up at home with his mother crying over him. According to his mother, Marco seriously damaged his skull. Marco falls asleep, but he is eventually woken up by a ringing phone. When he picks up the phone, Marco is greeted by the voice of a boy who addresses himself as Keith. Keith says that he hopes Marco is okay because he expects Marco to take care of him. Keith also says that he lives in Marco's basement. Marco is incredibly confused by this message. He tries to talk to his mother about the call, but she insists that he must be confused; there isn't even a phone in the room where he was sleeping.

The following day, Marco stays inside, and one of his friends, Jeremy, visits him. After Jeremy leaves, Marco stays up late into the night. While walking through his house, he notices that the basement door is open. Marco thinks he hears Keith's voice coming from inside. When Marco looks in the basement, he sees his mother doing laundry. Marco tries to get his mother to leave the basement, warning her that she's in danger, but she doesn't believe him.

On Monday, Marco returns to school. Miss Mosely, Marco's teacher, asks Marco about his experiences in the hospital after his head injury, but Marco doesn't remember going to the hospital. Miss Mosely consoles Marco, telling him not to worry about what he has forgotten. After school, Gwynnie chases Marco while carrying her softball bat. Frightened, Marco runs home. When Marco gets there, he finds Keith in his room. Keith insists that Marco has to take care of him. Marco locks Keith in the bedroom and pulls his mother upstairs. When they open the door, Tyler — Marco's dog — is sitting on Marco's bed. Keith is gone.

Concerned about his mental health, Marco's mom takes him to see a doctor named Dr. Bailey. Dr. Bailey suggests removing Marco's brain and inspecting it. Marco asks his mother to intervene, but she agrees with the doctor. Dr. Bailey sends Marco home, suggesting that Marco's operation commence the next day.

While typing out an essay later that night, Marco receives a call from Jeremy. After the call, Marco looks back at his screen only to find that his essay has been replaced by Keith's face. Marco is then surprised by Gwynnie. Gwynnie apologizes for hitting Marco. She explains that she wanted to apologize earlier, but Marco ran away. Marco asks Gwynnie to help him deal with Keith. Marco tries to show Gwynnie Keith's face on the computer screen, but Gwynnie points out that the computer isn't even on.

Marco takes Gwynnie to the basement. Gwynnie assumes that Marco is simply trying to scare her so he can tell everyone at school the next day. Gwynnie then says she can do something scary; she proceeds to open her mouth, and she turns inside out. The girl becomes a pink and yellow blob of organs. Marco suddenly feels the basement fade around him, and he wakes up. He is in a doctor's office with his mother. His mother tells him that he's been in the hospital bed ever since he was hit in the head.

From his hospital bed, Marco sees Gwynnie. He accuses Gwynnie of hitting him on the head, but she explains that Jeremy was actually the one who swung the bat and hit him. Gwynnie is, in fact, Marco's younger sister. Gwynnie and Marco's mother leave the room, and Marco falls asleep. He wakes up and is met by Dr. Bailey, who looks nothing like he did in Marco's dream. Dr. Bailey begins pulling on Marco's tongue. He continuously pulls out more tongue as Marco watches in horror as he pulls more and more tongue from his throat, creating a pile. Marco hears a voice telling him to wake up, which he does.

Marco is greeted by another, completely different iteration of Dr. Bailey. Dr. Bailey says that he wants to keep Marco at the hospital for one more night. The doctor hands Marco an envelope that was sent to him. Once the doctor leaves, Marco opens it. He finds that the envelope contains a letter from Keith, begging him to come home. Marco's mother and sister come back. He tries to give his mother the letter, but he can't find it. When Dr. Bailey returns, Marco asks him about the letter, but the doctor says that he doesn't recall giving Marco a letter.

The next day, Marco gets to go home. When Marco gets tired, he goes to his room to rest. He sees a figure approaching and discovers that it is Keith. Keith explains that he implanted himself in Marco's dreams in an attempt to get Marco's attention. Marco jumps up and hits Keith with a nearby paperweight. Keith begins morphing on the floor. He turns into a yellow blob creature. Keith wriggles towards Marco and latches onto him. Marco stumbles around his house and falls to the ground. Marco's mother returns, and she tells Marco to get up. Marco realizes that Keith isn't actually gripping onto him. Marco runs to his room, and he finds Keith once more. Marco, feeling weak, admits defeat. Keith opens his mouth and begins turning inside out.

Suddenly, Keith wakes up, and his mother greets him. Keith says that he's had many bad dreams. It is revealed that Keith was the one who sneaked out and was hit in the head while playing softball, not Marco. Keith's mom warns Keith against playing with humans because it might result in Marco and Gwynnie discovering that monsters live in their basement. Keith is in the process of turning inside out when Marco unexpectedly enters the basement. Panicked, Keith assures Marco that he is dreaming, but he's unsure if Marco will believe this lie.

The digital rerelease of this book makes some small changes. Notably, most instances of "crazy" are changed, such as the line "I'm not crazy" being replaced by "I didn't imagine it", "The whole idea was crazy" is changed to "The whole idea was silly", "What is her problem? Is she crazy?" is changed to "What is her problem? Does she hate me?" Curiously, other instances of it are unchanged, such as Marco's mother telling him he was "talking crazy" and Marco insisting he isn't. "Did he really expect me to be his slave-forever?" is changed to "Did he really expect me to do this--forever?" 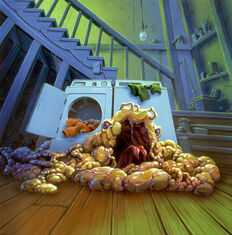 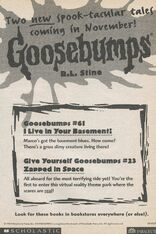