I Am Your Evil Twin is the sixth book in the Goosebumps Series 2000 book series. It was published in 1998.

The cover illustration shows a broken mirror. One half of the mirror shows Monty, and the other half shows an evil version of Monty.

Monty Adams is visiting his Uncle Leo, who he hasn't seen since he was 6, for a year. His mom is a zoologist about to spend a year in the jungles of Borneo studying orangutans. Leo is a scientist who spends most of his time doing weird experiments. Monty is disappointed that his cousin Nan won't be there for the weekend, as he gets along with her due to sharing similar interests and both having single parents. That night, Monty seems to have a dream where a man is about to use a scalpel on him.

A few months later, school starts and Mom leaves Monty in Leo's hands full time. Monty explores his house and finds the lab, which Leo warns him to stay away from.

On the first day of school, the teacher claims Monty met with her last week, even though he doesn't remember being here until that day. The next day in art class, Monty accidentally makes a mess and when he comes back later in the day to clean it up, it has been trashed even further. A classmate named Ashley blames Monty for this, claiming she saw him do it. He is sent to the principal, who says he met with her this morning. While he's cleaning the art room, he sees what he thinks is his reflection until the look-alike Monty stops moving along with him.

The next day during class, he sees his doppelganger outside a open window and tries to give chase, but only ends up causing a scene in class. After school, Monty asks Leo if he has a twin. Leo confirms Monty's suspicions. He explains that when Monty was born, his mother was poor and Monty's father had recently passed, leaving no one to help raise the two children she jut had. Monty was the first born, so Mom reluctantly had to give the twin away.

Monty assumes he's talking about the look-alike that had been tormenting him, but Leo reveals that his twin is actually Nan. Mom had given her away to Leo, who is actually her uncle. They planned to tell the kids the truth when they were 13. Nan comes home and the two discuss and bond over this revelation. Monty's happiness doesn't last too long as that night gets a call from someone saying things are going to get tough.

The next Friday, Monty and Nan are about to perform for a school assembly when he forgets his sheet music and looks for it in the supply loom. Someone locks him in and while he manages to escape through a window, he goes back to the assembly and sees his evil twin doing the piano performance with Nan.

The evil twin tells Monty that he is better than him and is going to take over his life. Evil Monty leaves and Monty follows him, only to find out he is going to Uncle Leo's house. Nan shows up, angry at Monty for seemingly ruining the performance.

They go to Leo's study and find a piece of paper that reveals he has been working on cloning experiments. Monty's evil twin was actually a clone created by Leo. Nan still refuses to believe that Monty has an evil clone or that Leo would do this. The kids go inside his lab and discover Leo, and four other clones of Monty. They try to hide in the closet and find another Leo, who is revealed to be the real one.

He explains that he cloned himself months ago and thought the clone understood that he had to lay low, but he was pure evil and has been creating the Monty clones in secret. He was also the one who Monty saw in his supposed dream. When Monty told him about his doppelganger, he went to confront Evil Leo but was overpowered and trapped in the closet.

He also explains that each clone has a tiny blue dot, to help tell them apart from the real version. But the clones bring Monty out and put a blue dot on him so that won't bail him out. Nan escapes and a half hour later, she has not returned. The clones plan to initiate him into their evil clone group, and reveal they don't feel pain and consider themselves an improvement over the real Monty.

That night, Nan returns with some of Leo's old college roommates, who pile the clones into a truck that is headed to South America. Unfortunately, Monty's blue dot makes it hard for them to know who the real Monty is. A clone Monty tells Nan a story the two bonded over, having been spying on them. This makes Nan think this is the real Monty so she chooses him and the real Monty is hauled into the truck along with the others.

Monty manages to trick the clones into helping him by reminding them that they are superior and deserve to live the "real" Monty's life. He has them hoist him up, but he pricks his hand on the hatch of the trick and his reaction reveals he feels pain and is not a clone.

Monty tricks them into fighting over his name and when the guards check the commotion, Monty escapes and runs back to Leo's house. Nan is shocked to see another Monty claiming to be the real one. They start fighting until Nan comes up with a plant to determine who the real one is. They will give him a doughnut full of peanut oil, as the real Monty is allergic to peanuts.

This seems to work as the Monty who vomits is chosen. The other Monty is hauled into the truck, despite his protests. That night, the seemingly real Monty reveals himself to be the evil one, having switched the doughnuts and pretended to vomit. Nan asks how he could do that to Monty, and he responds with "Nan, I'm your evil twin!" 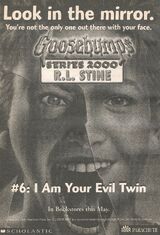 Book advertisement from Invasion of the Body Squeezers: Part 2. 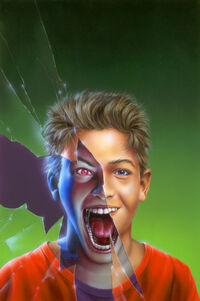 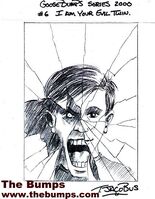 Retrieved from "https://goosebumps.fandom.com/wiki/I_Am_Your_Evil_Twin?oldid=113735"
Community content is available under CC-BY-SA unless otherwise noted.