Legend of the Lost Legend
How to Kill a Monster is the forty-sixth book in the original Goosebumps book series. It was first published in 1996.

The cover illustration shows the hands of the Swamp Monster sticking out from behind the door.

Gretchen and her stepbrother, Clark, hate staying at their grandparents' house. Grandpa Eddie is totally deaf. And Grandma Rose is obsessed with baking. Plus, they live in the middle of a dark, muddy swamp. Things couldn't get any worse, right? WRONG. Because there's something really weird about Grandma and Grandpa's house. Something odd about that room upstairs. The one that's locked. The one with the strange noises coming from it. Strange growling noises...

When Gretchen and Clark arrive their grandparents' house, they are assigned bedrooms, which they quickly settle into. The next day, the kids go to the kitchen for breakfast, where Grandma Rose is making a large amount of pancakes. After breakfast, Gretchen is walking to her bedroom when she sees her grandfather carrying a big stack of blueberry pancakes down the hall. Later, Grandma Rose invites the kids to watch her make rhubarb pie. They decline, but Grandma Rose insists on it. The kids go to the kitchen only to find that she isn't making just one pie, but three pies.

The kids are told to go explore the house, but Grandpa Eddie warns them to stay out of the "forbidden room," because it's a supply closet where the grandparents keep stuff that could easily break. The kids explore several rooms. One room is filled with boxes of newspapers. The kids find another room full of old toys and games. Eventually, the step-siblings decide to play hide-and-seek in the house. Clark runs away and hides, and Gretchen starts looking for him. She approaches the forbidden room and hears sounds coming from inside. Assuming that Clark cheated and hid there, she opens the door, but, instead of her brother, she finds a hideous swamp monster.

Luckily, the monster doesn't see Gretchen, so she is able to escape the room. She finds Clark and tells him what she saw. Clark doesn't believe her and, thinking it was all a joke, enters the forbidden room. When Clark sees the monster, the step-siblings run away, leaving the door open behind them. The monster chases the children, growling. Gretchen and Clark look for their grandparents, but they don't seem to be home. Gretchen hears the sound of a car, and looks out from the window, only to find their grandparents driving the car out of the swamp. The kids try to leave the house, but the door is locked from the outside.

A few minutes later, Gretchen hears her brother calling her from the kitchen. He tells her the monster is still upstairs. Clark notices something attached to the refrigerator: two numbered envelopes have been left by their grandparents. Clark opens the first one. It reveals that Grandpa Eddie and Grandma Rose have been dealing with the swamp monster upstairs for weeks. The monster invaded their house, but they managed to trap it in a room upstairs. The letter says that both grandparents have gone for help, but they believe Gretchen and Clark will be safe so long as they don't let the creature out of its room. The letter also says that, if the monster gets out, the kids will have to kill it.

Clark starts to open the second envelope, but he stops when he sees the swamp monster in the kitchen doorway. The children evade it and try to find a way to kill the monster. Gretchen tells Clark that they can kill it by taking it to the third floor stairwell: the stairs are old, and they will likely break beneath the monster's weight.

The kids enact their plan. They watch the monster fall through the stairs, and they assume the creature died. They walk downstairs, but Gretchen quickly hears the monster growling. She runs to the kitchen and tells Clark that the monster isn't dead. Gretchen sees Grandma Rose's rhubarb pie and has an idea. She plans to poison the pie and feed it to the monster. The kids pour several things into the pie, such as turpentine, a can of drain cleaner, rat poison, ammonia, old paint and mothballs. Seconds later, the monster appears in the kitchen, and the children hide. The swamp monster eats the poisoned pie, which causes him to fall to the floor, apparently dead.

It turns out that the monster didn't actually die, so Gretchen and Clark try to attack him. After some fighting, the monster manages to grab Gretchen. The monster licks Gretchen, ready to eat her. However, the monster speaks, asking Gretchen if she's humans. She says she is, and the monster reveal he's allergic to humans. He then falls over and dies.

The children get their dog and leave the house. After a few minutes of walking later, Gretchen remembers the second envelope. They open it it tells the kids that, if they kill the monster and leave the house, they should avoid the swamp at all cost and stick to the road. The monster has brothers and sister out there, waiting for him. The kids hear monsters growling all around them in the swamp.

Apparel for the book remove the word "Kill" from the title. 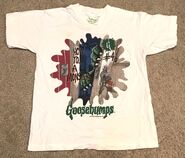 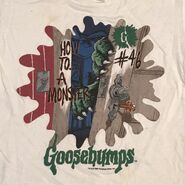 How to Kill a Monster was adapted into an episode of the Goosebumps TV series. It is the eighteenth episode of season two, and the thirty-seventh episode overall. 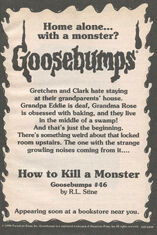 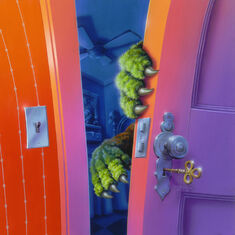 Bookmark (front and back).