Goosebumps Wiki
Register
Don't have an account?
Sign In
Advertisement
in: Books, Goosebumps Most Wanted, Schools,
and 10 more

Frankenstein's Dog
How I Met My Monster is the third book in the Goosebumps Most Wanted book series. It was published in 2013.

The cover illustration depicts an orange furred monster wearing a t-shirt that says, "I ❤ Wolves" in front of a green, scratched wall.

Noah Bienstock can't help being so shy and nervous; he's always been like that. His best friend, Lissa Gardener, lives in the same building, but aside from her, Noah isn't very popular. So when he learns that the new student in his class is also his neighbor, Noah's excited to have a new person to hang out with. But as the boys spend more time together, Noah starts to worry all over again -- is there something strange about his new friend?

Noah Bienstock is plagued by nightmares where he is chased by monsters. He's a shy nervous kid who has trouble making friends, with his only real friend being Lissa Gardener. He also has to deal with a bully named Harlan Egman. Lissa thinks his monster dreams are tied to Harlan and that Noah should stand up to him, but he isn't sure.

At school, the teacher introduces a new kid named Monroe Morton, who has moved into Noah's apartment building. Noah and Monroe hit it off very well, while Harlan continues to harass Noah. The next day, Noah thinks he sees a monster on his way to school, but it quickly vanishes.

Sometime later, Noah and Monroe are hanging out at a fast food restaurant, when Monroe gets impatient waiting for his food and goes into the kitchen to complain. Noah then hears a roar coming from the kitchen, and a woman screaming about a monster. Monroe exits soon after, with a bit of raw hamburger dripping from his chin. They go to the pet shop Noah's dad owns, and he sees the monster again. When he calls dad over to see it, it has vanished and Dad doesn't believe him because of Noah's monster nightmares.

Noah starts to think Monroe might be the monster, but he doesn't want to lose him as a friend. At home, he finds a dead gerbil on his desk, along with words written in marker that read MONSTERS RULE! That night, he has a nightmare where a monster says "You're next!", and thinks it has to mean something. The next day, Noah goes to Lissa's house where she claims to see the monster stalking Noah. They both agree that it could be Monroe, so Lissa suggests following him to see if this is true.

Noah keeps an eye on him at school the next day, but he doesn't show any signs of being a monster. He follows him home but has to go get groceries for Mom. Before he leaves, he sees three monsters wrestling for fun. He pulls Mom outside to see them, but they have vanished. The next day, Noah goes to Lissa's swim meet and he sees a monster in the pool.

The monster pulls him in and says "You're next!", just like in the dream. Noah asks the monster if it is Monroe and it only says "Maybe'. The monster leaves, and that night Noah decides to tell Mom and Dad the full story of what is going on. Before he can, they announce that they are going to do some work for N.A.S.A. for a week, and will have Noah stay with Monroe's family during that time.

On the first night at his house, Noah hears a noise and goes out to investigate and again sees the monsters, who says "You're next"! once again. Noah asks it why they are doing this, and the monster reveals that it is actually Lissa. She says she is scaring him to "help" him but Noah runs away before she can explain further. While he runs, she warns him that "Friends don't tell on friends." Noah tells Monroe about this, but only laughs and says "Friends don't tell on friends."

The next day is the school's pet fair, and while Noah is alone in the gym with everyone else in class, Lissa storms in as a monster, and starts wrecking the place. She leaves after she's done, again saying that "Friends don't tell on friends". Noah is blamed for the mess. He tells the teacher about Lissa, which she overhears and is upset about. Lissa chases Noah, who runs home. He meets up with Monroe, who turns out to be a monster as well.

They reveal that everyone at Sternom House is a monster, including Noah. He hadn't found his inner monster, and telling him about his monster is not allowed. So, they've been trying to scare the monster out of him. They give him a drink called Monster Helper, which works and brings out Noah's inner monster. He met his monster, and it's him. Noah and his monster friends then go to Harlan's house to "have some fun" with him.

An unused version of the cover for the book How I Met My Monster features a slightly different design. The most obvious way that the images differ are in the messages on the shirt; the pre-release cover uses the phrase, "I ❤ Werewolves" instead of the phrase, "I ❤ Wolves", which was used on actual printings of the book. Additionally, the color saturation of the final version of the cover is different than that of the pre-release cover. 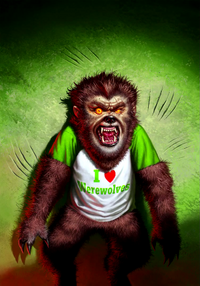