Chicken Chicken
How I Learned to Fly is the fifty-second book in the original Goosebumps book series. It was first published in 1997.

The cover illustration depicts Jack Johnson's lower legs as he flies with some seagulls in the skies above Malibu.

HE'S GOT HIS HEAD IN THE CLOUDS. FOR REAL...

Wilson Schlame loves to make Jack Johnson feel like a total loser. And Jack's had it. That's how he ended up down at the beach. In a creepy, old abandoned house. In the dark. Trying to hide from Wilson. But everything is about to change. Because Jack just dug up the coolest book. It's called Flying Lessons. It tells how humans can learn to fly. Poor Jack. He wanted to get back at Wilson. But now that Jack's learned how to fly, things down on earth are getting really scary...

Jack Johnson is constantly tired of being bullied and outshone by Wilson Schlamme. Wilson always tries to prove that he is the best at everything. Wilson's competitive nature worsens whenever Mia Montez is present; Jack describes Mia as being the cutest girl at the school they attend, Malibu Middle School.

Jack — an aspiring cartoonist — loves drawing superheroes. He plans on showing his latest creation, The Incredible Laser Man, to Mia. Before he gets the chance to do this, Wilson shows Mia a drawing of his own: an entire team of heroes! After school, Wilson challenges Jack to a bike race, and Mia observes. Wilson wins the race. Soon after, the three kids are informed by Mrs. Green, Jack's neighbor, that her kitten is stuck in a tree. Jack attempts to climb the tree, but he slips and falls from a branch. Wilson climbs the tree and rescues the cat with ease. Jack tries to leave hurriedly. Before he can get away, Mia invites both him and Wilson to her upcoming birthday party on Saturday. Jack is immediately worried by the prospect of competing against Wilson at party games, but he resolves to go anyways.

On Saturday, Jack goes to Mia's party, bringing a present with him. During a game of Twister, Jack's pants tear in the back. Everyone sees Jack's underwear, and they all laugh. Jack almost leaves the party, but he is coaxed into staying by Mia, and he is given a pair of her brother's shorts. Mia begins opening her presents, and she happy to find that Jack has given her a CD by her favorite band, Purple Rose. However, Jack's gift for Mia is quickly eclipsed by Wilson's gift: two tickets to see Purple Rose live. Bewildered by Wilson's actions, Jack storms out of the party. Mia and other party attendees chase after him. Jack is only able to get away from the other kids by ducking into an old, abandoned house. While exploring the house, Jack falls through a patch of loose floor boards and into the basement. Jack spots a trunk, and, inside the trunk, he finds a book called Flying Lessons. When a group of rats begin attacking him, Jack is forced to sprint up the basement stairs, out of the house, and all the way home.

Just as Jack arrives home, his parents leave. Jack begins reading the book that he found. The book features pictures of people flying and provides Jack with instructions on how he can fly. Jack is skeptical, but he decides to follow the books instructions anyways. The book gives Jack the recipe for a potion. Jack finds all of the necessary supplies from his kitchen. The book also instructs Jack to perform a strange series of exercises and recite a cryptic chant: "Hishram hishmar shah shahrom shom." Jack does both of these things and begins mixing the doughy potion. The book provides Jack with an envelope of blue powder to pour into his mixture. While Jack is distracted, his dog, Morty, starts eating the potion. Jack stops the dog before it can finish the entire bowl. The dog then begins floating through the house and out of a window. In the hopes of saving his dog, Jack eats a large portion of the potion and runs outside. Jack feels a strange sensation in his stomach, and, suddenly, he is able to fly. Jack flies after the dog and eventually catches it. He slowly begins to learn how to control his flight. Amazed by his new power, Jack flies around his neighborhood before returning home. Jack hides Flying Lessons inside of a mattress in the garage.

Over the course of the next few days, Jack wants to show off his flight to Wilson and Mia, but he repeatedly runs into complications. One day, when the weather outside is fair, Jack challenges Wilson to a race, and Mia agrees to watch. Jack jumps into the air and begins flying, but he quickly realizes that Wilson is flying behind him. Shocked, Jack falls to the ground, and Wilson wins the race. Wilson says that he had seen Jack flying several days ago and saw where Jack hid his book. Wilson temporarily stole the book so he could teach himself how to fly. Mia asks Jack to teach her how to fly, and he agrees. When the two of them make it back to Jack's house, they find that Mr. Johnson threw away the mattress that the book was hidden in. Mia is disappointed at first, but, after thinking it over, she realizes that flying could be very dangerous. She warns Jack to avoid flying in the future. Jack considers this advice, but he eventually goes out flying again that night.

When Jack arrives home after a night of flying, he gets a call from Wilson. Wilson informs Jack this he's scheduled a special race for the following day, and the entire school will be watching. The following day, Jack is unable to call off the race. Jack is pressured into flying, but he still loses the race. The entire school is speechless. For the rest of the day, all of Jack's peers seem to avoid him in fear. Jack is pulled aside by the school nurse and introduced to several scientists. The scientists say that they want to experiment on Jack. Jack, fearful of the scientists, runs home. Jack is surprised to find that his parents are home. Jack's father reveals that he is very excited. Mr. Johnson is a struggling talent agent, but Jack's new talent could make his family a lot of money.

Soon, Jack's father begins arranging shows for Jack. The government is also interested in Jack. Government scientists force Jack to partake in strenuous tests. One day, Jack's father tells Jack that he's scheduled another race between Jack and Wilson. On the day of the big race, a crowd of thousands come out to view Jack and Wilson. Jack is almost crushed by the crowd when he as he is guided to the stage. When Jack sees Wilson, he can tell that Wilson loves the attention he's getting. The race begins, but Jack doesn't fly alongside Wilson. Jack falls on his feet. To the exasperation of his father and the crowd, Jack has seemingly lost his ability to fly.

As several months pass, Wilson becomes increasingly more famous, and Jack becomes more obscure. Eventually, Wilson has to leave Malibu Middle School because of his busy schedule. Jack says that his own life has gone back to normal. He tied a heavy collar to his dog to prevent the cocker spaniel from floating away. Jack spends lots of time with Mia and his other friends. Jack also divulges an important secret: he can still fly. He's hidden this information from all of his friends, all of his family, and even Mia. On the day of the race, Jack pretended to lose his ability to fly so he could get his life back. On some nights, Jack still flies over Malibu... 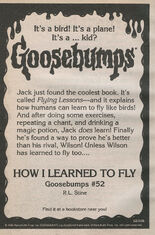 Book advertisement from Beware, the Snowman. 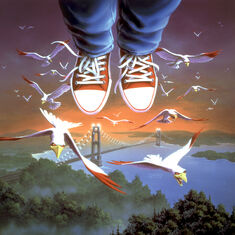 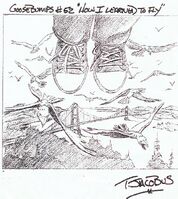