How I Got My Shrunken Head is the thirty-ninth book in the original Goosebumps book series. It was first published in 1996.

The cover shows a shrunken head sitting on top of a cluttered dresser.

Two Heads Are Better Than One!

The head is from the jungles of Baladora, which Aunt Benna has been exploring for over ten years. That night, when Mark goes to bed, he suddenly hears his name being whispered and believes it to he the head, but when he investigates, it's only Mark's sister, Jessica, playing tricks on him, jealous that he got the head and not her. Later that night, he thinks he sees the head levitate, and its eyes begin to glow. However, when he tries to tell his family, the head appears in a lifeless state.

The next morning Mark learns from Mrs. Hawlings that his Aunt Benna needs him in Baladora immediately. He is promptly flown there by airplane, and he's brought his shrunken head as well. Mark meets Carolyn's brother, Dr. Richard Hawlings, and his daughter, Kareen. They inform Mark that his aunt has been missing for weeks, and they will only be able to find her if Mark can harness the Jungle Magic he possesses. It is explained to Mark that, when he was four, Aunt Benna taught him the secret of Jungle Magic. Sadly, this was so long ago that Mark can't remember how to activate it.

Mark travels deep into the jungle. Eventually, the boy falls asleep, dreaming of dozens of shrunken heads surrounding him, telling him to hurry. When he wakes up, he sees that he is almost completely covered in red ants. He panics and screams "Kah-Lee-Ah!", which makes the ants leave suddenly. Mark deduces that he unknowingly used Jungle Magic. As he ponders aloud, the shrunken head's eyes glow. After trekking further, Mark gets caught in quicksand. He tries the magic words again, but they don't free him. When he holds the shrunken head high, it lifts him up, out of the quicksand.

Soon, Mark encounters a tiger. The animal is on the verge of attacking him, but Mark uses the magic words, causing the ground beneath him to open up. Mark is lowered enough to avoid the tiger. Kareen arrives and frees Mark from the hole. The two eventually find Aunt Benna, but she is suspicious of Kareen. However, Kareen reveals she was working with her father and Carolyn this whole time. Now, the evil trio knows where Mark and his aunt are.

After locking up Mark and Aunt Benna for a while, the Hawlings eventually bring the two to a pile of shrunken heads and a giant pot of boiling water. Dr. Hawlings tries to intimidate them into telling him the secret of Jungle Magic; he threatens to shrink their heads if they don't tell him how to perform it. Mark tries to use his shrunken head to stop Dr. Hawlings, but it gets knocked into the pile of heads. Aunt Benna starts to wrestle with Dr. Hawlings, and Mark dives into the pile of heads. Mark manages to find the right one due to a scratch put on it by his sister, Jessica. Dr. Hawlings tries to attack Mark, but, before he can, Mark recites the magic words while holding the shrunken head. This causes Dr. Hawlings, Carolyn, and Kareen to shrink to the size of mice. The three panic and run off into the jungle, never to be seen again. 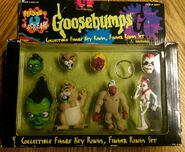 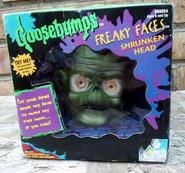 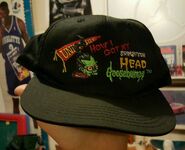 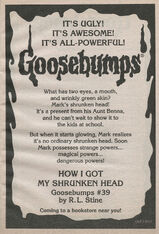 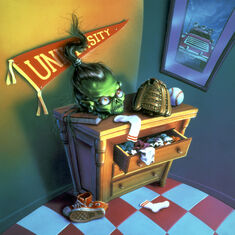 Retrieved from "https://goosebumps.fandom.com/wiki/How_I_Got_My_Shrunken_Head?oldid=111897"
Community content is available under CC-BY-SA unless otherwise noted.