Ring around the creature!

Return to Ghost Camp
Horrors of the Black Ring is the eighteenth book in the Goosebumps Series 2000 book series. It was published in 1999.

The cover illustration depicts a pile of jewelry, and in the center is a black ring. There appears to be a monstrous face inside the jewel.

Beth Welch is a kind girl who is constantly being terrorized by the wisecracking Anthony Paul Gonzalez, and is mocked by her younger sister Amanda for being a "goody goody". She has always wanted to get back at Anthony for his tricks, but she doesn't consider herself the get even type. She sees him about to run away over a small bird and is able to save it just in time, naming it Chirpy. She ends up being late for school due to taking Chirpy to the vet but her teacher, Miss Gold, doesn't mind. Beth notices that Miss Gold has a new ring with a strange black jewel on it. She sees something moving in it but Gold claims it is simply a flaw in the jewel. However, she says she can't seem to get the ring off.

Later that day, Beth hears screaming coming from Miss Gold's room. She discovers a message on the chalkboard warning that the upcoming school carnival, which Beth is working at, is doomed. Because Anthony has chalk dust on his hands, it is assumed he did it, but he denies it. The following Saturday, Beth gets a phone call from a strange voice telling her not to go to school and prepare for the carnival. She ignores the warning and decides to go anyways. She arrives at school with her crush Danny Jacobs, only to see that the art room has been trashed, with the exception of a painting of Beth that Anthony had made. However, he still denies it is him.

Later, the kids start making food for the carnival in the Home Ec room only for the oven to start smoking. A fire breaks out just as Anthony is spotted walking by the room. They all manage to escape in time. The next day is carnival day, so they start setting things up. Beth takes a brownie for herself but vomits after discovering there are maggots inside of it. The kids tell Miss Gold what happened, when Anthony enters the room telling them that the dunk tank is all set up. When they test the dunk tank, they find out the water is boiling hot. This makes Miss Gold want to call off the carnival but the principal, Mrs. Cooke, says it is too late and they will simply amp up security.

The carnival begins and all seems well, until a hooded figure shows up to wreak havoc, such as releasing some wasps. The figure takes Amanda and tries to kidnap her, but a policeman is able to take it down. They unmask the hooded figure only to discover that it was Miss Gold this whole time. She claims that she didn't do it, and as she is being taken away, Beth finds her ring on the ground. She is compelled to put it on and finds that she can't take it off, and that now there's a laughing face in the jewel.

That night, Beth has a strange dream. When she wakes up, her pillow has been shredded to pieces. The next day, she visits Miss Gold at the hospital. When she sees the ring, she freaks out, screaming at Beth to take it off. Beth runs all the way home, but when she arrives, she feels calmer and starts seeing the ring as beautiful.

The next day, Beth starts acting rude towards Amanda, and then she suddenly tears up Anthony's bike, feeling a surge of power. She continues her reign of terror as she shoves a boy into a locker and puts a mouse in the school lunch. She begins to see why Anthony loves being such a jerk so much. She also breaks Amanda's Barbie dolls, and starts hearing a voice in the ring, telling her that the real evil has yet to come.

After a few more days of evil, Beth tries to stay away from people. However, she promises Danny she would attend a Bike-a-thon for charity and the ring pushes Beth into going. The ring wants her to cut off Danny's breaks, but she is able to hold down the evil and refuse to do it. Despite resistance from the ring, she runs home where she discovers that Chirpy has died. She tries to cut the ring off but black smoke pours of it, with the ring's evil face in it. The voice announces that its evil has outgrown the ring and now it needs Beth's body to live. It also reveals that it slipped off Miss Gold on purpose, as she was no longer useful.

Beth tries to cut off her finger, but gets an idea when she looks at Chirpy. To her surprise, she is able to take the ring very easily, and puts the ring on Chirpy's foot. This sucks the evil out of Beth, and into Chirpy. Because the ring needs a living body, this kills the evil inside of it, and is defeated for good. Beth is able to bury Chirpy just as Amanda and Mom arrive home. Amanda announces that Mom had gotten her a new ring, which happens to have a face in the jewel, just like Beth's. 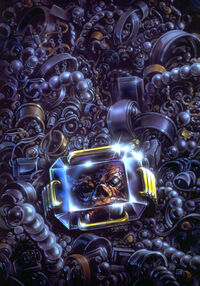 Retrieved from "https://goosebumps.fandom.com/wiki/Horrors_of_the_Black_Ring?oldid=150092"
Community content is available under CC-BY-SA unless otherwise noted.