Goosebumps Wiki
Register
Don't have an account?
Sign In
in: Books, Give Yourself Goosebumps, Magic,
and 12 more

Ship of Ghouls
Hocus-Pocus Horror is the thirty-fifth book in the Give Yourself Goosebumps gamebook series. It was published in 1999.

The cover illustration depicts a demented, furry, green creature wearing a magician's top hat. The creature had a magic wand in between its teeth, and both ends of the wand had snapped off.

NOW YOU SEE YOU, NOW YOU DON'T!

The magic show is about to begin! The Great Mysterio will now choose two volunteers from the audience: your friend Zack — and you! That means you're in for some major danger. Why? Because Mysterio is an evil magician. Right now he's giving electric shocks to a puppy to make him bark on cue! And you could be next!

If you go on with the show, you'll face a deck of razor-sharp cards—thrown right at you! If you decide to steal Mysterio's bag of tricks' you'll get to play with some cool potions like Disappearing Powder. But spill some on yourself and you may never reappear—except as a monster!

The choice is yours in this scary Goosebumps adventure that’s packed with over 20 super-spooky endings!

You attend a magic act with your friend, Zack, which stars the great Mysterio. Zack is enjoying the show, because he thinks magic is real. However, you do not, but you have a motive for attending. You want to stop Mysterio from harming any animals in his act. Soon Mysterio performs a standard magic trick, and asks for two volunteers, causing Zack to volunteer and you are chosen, despite not wanting to do it. After the trick you notice that the Civic Centre looks rundown and old despite how new everything was earlier.  You also notice that Mysterio looks different. He is ghost-white and more evil looking!

Mysterio performs an act which involves him electrocuting a puppy, while asking him various things. This disgusts you but before you have a chance to act, Mysterio introduces his volunteers, adding that you will both remember this act for the rest of your live, which may not be that long...

You and Zack decide to run away, but a puppy named Ralph stands in your way. It does not take you too long to realize he wants to escape. Mysterio begins to shout at you and Ralph. Ralph hops into a suitcase, but when you look inside, you cannot see him anymore. But you can see a box of “Disappearing Powder”, which actually causes invisibility, not a disappearance. You then take the case and run away. Upon looking at the suitcase, you see the following words; “MYSTERIO’S BAG OF TRICKS. DO NOT OPEN! DANGER!!!”.

This concerns you and Zack, since you worry about Ralph, if you close it. But you really cannot ignore the warning, and what happens, if Mysterio decides he wants his suitcase back...?

You and Zack decide to hide, but the only place available is behind the curtains, but when you do, you are eventually forced to peak out slightly for some air. However, this gives you your first look at Mysterio’s audience, and you do not like what you see. Everyone in the audience is a phantom! You return to your hiding place, and overhear Mysterio shout that he wants his “guinea pigs” on stage as soon as possible and you realize you're actually in an alternate dimension! Zoltan, Mysterio’s assistant finds you, and informs you that you are to be part of Mysterio’s act, and if you do well you will be allowed to go home, but if you disappoint him, you’ll become a phantom and be forced to watch his show for eternity.

You decide to run from the magic act in Story B, but in an ironic twist, it becomes just an extended method of getting two bad endings, and there are only two choices to make.

There are eighteen bad endings and six good endings. 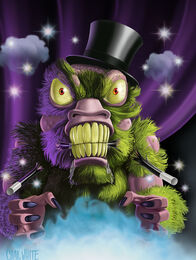