Help! We Have Strange Powers!

Help! We Have Strange Powers!

Escape from HorrorLand
Help! We Have Strange Powers! is the tenth book in the Goosebumps HorrorLand book series. It was published in 2009, alongside Welcome to Camp Slither. The book follows Jillian and Jackson Gerard who receive strange powers after visiting a fortune teller's booth in the mall.

The cover illustration depicts Madame Doom in her booth as electricity is shooting out of her crystal ball.

Jillian and Jackson freak out when they suddenly can read people's thoughts. But the trick turns to terror when the twins are stalked by a strange scientist who wants to know exactly what's on their minds. Will the twins ever lead normal lives again?

Not in HorrorLand they won't. There are free meals, free games, and free falls down the Doom Slide. Someone's watching their every step. But is she friend or foe?

Jillian and Jackson Gerard are twins. They go to the movies and see Nina and Artie Lerner, a pair of nerdy twins that they know from school. Artie spills popcorn on Jackson's sweater, and they begin fighting. The four kids are thrown out of the theater. Jackson and Jillian decide to waste time by going to an animatronic fortune teller's booth in the mall. The wooden fortune teller is named Madame Doom. The kids put in a quarter and try to get their fortune told, but they accidentally get electrocuted in the process. After the shock, Madame Doom's machine dispenses a small slip of paper that says "Welcome to HorrorLand."

The next morning, Jillian's mother makes waffles for breakfast. Jillian says that she knew they were going to be having waffles. During breakfast, the kids accidentally begin moving objects with their minds, and they predict what their parents are thinking multiple times. At school, Jillian accidentally answers questions before Nina asks them and Jackson is making things float in the cafeteria. The kids continue to use their new powers throughout the day.

Days later, Jackson and Jillian's parents go to a dinner party. While their parents are gone, Jackson and Jillian go to a tennis court and test their powers. The twins realize that they are being observed by a man whose face looks incredibly old. The man addresses himself as Finney, and he says that the institute that he was affiliated with had picked up the kids' psychic vibrations. Finney show the kids a glowing jewel, and the jewel's glow freezes the kids.

When the kids regain consciousness, they are in a lab. They meet a scientist who is nicknamed Inspector Cranium. The kids tell Inspector Cranium that they do not have special powers, but Inspector Cranium says that he has to test the kids before he can let them leave. After several tests, Jillian lies and convinces the scientist that she does not have powers. Inspector Cranium hands the kids a business card and lets Finney take the kids home, and Finney tells the kids that The Institute will be watching them. The two kids resolve to tell their parents about their powers.

Several days later, Jackson and Jillian go to visit Nina and Artie, but their house is vacant. Jackson and Jillian leave and stumble into Madame Doom's fortune booth on the sidewalk. The kids are confused as to why the machine is where it is. Jackson puts a quarter in the machine, and he gets a fortune about dental hygiene. They flip the card over, only to find another short message welcoming them to HorrorLand.

Jillian and Jackson Gerard get an invitation to HorrorLand in the mail, and they decide to go. The kids hope that they will find something that explains their psychic powers in HorrorLand. The kids find Madame Doom's fortune telling booth. The machine dispenses a card saying "ESCAPE HORRORLAND." The kids are stopped by Inspector Cranium. Before Inspector Cranium can enact his revenge, the kids run away. Jackson lifts Madame Doom and throws her at Inspector Cranium. This allows the kids to escape to the Doom Slide. The kids ride the slide, but they are met by several Horrors at the bottom of the slide. The Horrors take the two kids to The Keeper.

The kids are taken into a shop and moved downstairs. The siblings see a group of kids as well as a villain wearing leopard skin (Dr. Maniac) and a purple villain (the Purple Rage). Jackson uses his psychic powers to throw a chandelier at the Purple Rage, which liquefies the Purple Rage. Dr. Maniac scares the kids by making the room extremely hot and then extremely cold. The room gets so cold that Robby falls to the ground, and the others assume that he has died.

Dr. Maniac becomes distraught by this; as The Keeper, Dr. Maniac is supposed to keep, not kill. Dr. Maniac says that someone named The Menace will kill him, so he runs away. Robby gets off of the ground and reveals that he was only pretending to be dead. The kids are able to escape, and then begins searching for a mirror. One of the kids, Matt, uses a keycard that Byron had given him to enter a restaurant filled with mirrors. Five kids manage to jump through the mirrors, but the remaining six kids (Matt, Carly Beth, Julie, Robby, Jackson, and Jillian) hit solid glass. Several members of the Monster Police chase the kids away. The six kids meet two new kids; Luke and Lizzy Morris. Luke and Lizzy say that they are not working for the Horrors, but Jillian reads their minds and determines that they are lying. 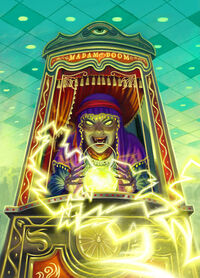