Talk about getting ahead!

Attack of the Graveyard Ghouls
Headless Halloween is the tenth book in the Goosebumps Series 2000 book series. It was published in 1998.

The cover illustration depicts a headless figure holding a green head in his left hand and placing his right hand on a pumpkin.

Brandon Plush is a cruel bully who loves to scare people, especially his sister Maya and cousin Vinnie. He babysits two kids named Jennifer and Ray Sullivan and uses his visits to scare them with stories, such as one about a headless boy living in their basement. After he pretends to be the headless boy, Mrs. Sullivan calls Brandom's Mom, who doesn't approve of his scaring. The next day, he plays a prank on Vinnie where he pretends to spill acid on him, which is seen by the science teacher Mr. Benson, who Brandon hates due to his strictness.

He punishes him by making him clean the science lab, and Brandon starts planning his revenge. He and his friend Cal plan to break into Mr. Benson's house on Halloween night, but their plans are halted when Mrs. Plush forces Brandon to take Maya, Vinnie and their friends trick or treating. But they are quickly able to ditch them. They leave Vinnie at the steps of a supposedly haunted house and soon hear a scream, but Brandon tells Cal to just ignore it.

After scaring some trick or treaters, they sneak into Mr. Benson's house to trash it. However, two scary dogs he has chained up break out and chase the kids. Brandon sees Raven's Ravine, an infamously steep ravine that no one has ever been able to jump across. He tries to jump across it and seems to make it to the other side, but he doesn't recognize any of the streets on the other side.

Brandom bumps into a kid with the same monster mask he has, who introduces himself as Norband and invites him to a Halloween party. The party seems normal until Brandon is forced to eat a worm-filled doughnut and bob for cockroaches. He manages to get out of the house but is stopped by some zombie hands and head popping out of the grass. He escapes them and ends up back at Raven's Ravine, but is shocked to find his own body at the bottom.

Norband appears and explains that Brandon died while trying to jump the ravine, and he's now in the spirit world. Brandon asks if they can give him another chance, and Norb says he will get another chance at life if he can save three scared people in one hour. Brandon is given his body back for the hour and goes to save people. First, he sees Cal still being threatened by Mr. Benson's angry dogs.

Cal is able to escape while the dogs are paying attention to Brandon, who distracts them with candy. He comes across the house he abandoned Vinnie in and goes in, but Vinnie warns him to leave, as there is a horrible ghost keeping him there. An ugly ghost then appears and Brandon attempts to scare him off with his headless disguise, which works. However, Vinnie reveals that it wasn't the ghost. It was the ghost's pet, and that the whole house is evil.

The house comes to life and starts making Vinnie spin in a chair. Brandon figures that the ghost might be stopped by light, so he shines a flashlight on the walls. This works and they retreat, giving the two time to escape. Vinnie goes back to his house, leaving Brandon with only one more person left to save. He sees Maya being threatened by three bullies and tries to use his headless routine. It fails and he is forced to climb a tree. Suddenly, Brandon's hour runs out and his spirit falls out of body, scaring the bullies away.

He goes back to Norband, who takes off his mask to reveal Brandon's face, which he pulls off to reveal no head. He went as Brandon for Halloween, and this was all a joke he and his friends played on him. They never planned on giving back his body. However, Brandon realizes it's still Halloween, and suggests they go out and do some serious scaring. 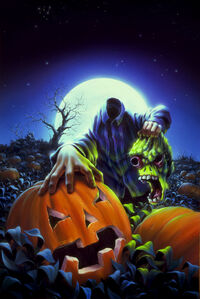 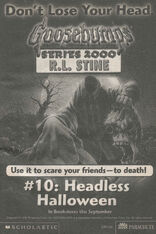 Retrieved from "https://goosebumps.fandom.com/wiki/Headless_Halloween?oldid=151454"
Community content is available under CC-BY-SA unless otherwise noted.