Jordan Prentice (Hap)
Yvan Labelle (Chip)
Hap and Chip are a pair of Lawn Gnomes that appear in the thirty-fourth Goosebumps book, Revenge of the Lawn Gnomes, and its television adaptation.

Joe's dad spies two darling little lawn gnomes and instantly purchases the small plaster men from an old lady named Lilah. Mindy warns that the lawn gnomes look evil. Joe's father however ignores such frightful talk and cheerfully names the little guys Chip and Hap. Walking back home with the gnomes in hand, Joe thinks he sees Hap change its expression from a cheery grin to a grim scowl.

Hap and Chip began committing acts of vandalism on Mr. McCall's lawn, with Buster the dog and later Joe getting blamed. As Joe pleads his innocence, he brings in evidence of the real perpetrators: black paint underneath one of the lawn gnome's hands and a melon seed between his lips. It soon becomes apparent that the rivalry between the neighboring gardening aficionados is escalating.

Joe becomes convinced that Hap and Chip are responsible and talks Moose into staking out the two houses to catch the lawn ornaments in the act. The two hide across the street on a stakeout. Eventually, the lawn gnomes do come to life and start their terrorizing. The giggling men start splashing big buckets of paint against the exterior of Joe's house. A confrontation between the gnomes and children breaks out and at some point Mindy shows up and one of the lawn gnomes drags her into the street by her hair. The lawn gnomes suddenly get very serious and reveal that they are Mischief Gnomes who were kidnapped from their native forest and sold into slavery. Hap and Chip reveal that they can't help causing trouble, it's in their nature. If the three kids will help rescue their friends being held at the garden supply store, the gnomes promise to leave forever. The kids agree and make their way to the old woman's house.

Hap and Chip would have freed their friends alone but they weren't able to get in the basement window. Now with the help of the children, they'll be able to free their six Mischief Gnome friends. The kids lower the Mischief Gnomes into the dark basement and follow behind. Once inside, they see that they've been tricked there are six hundred gnomes waiting for them.

Luckily, Joe remembers how Mischief Gnomes are scared of dogs and so he calls for Buster to come into the basement using his whistle. But it turns out Gnomes aren't scared of dogs, they're scared of dog whistles. All of the Gnomes, Hap and Chip included, freeze into place as soon as Joe blows the trinket.

Chip and Hap make appearances in the film Goosebumps 2: Haunted Halloween. They are first seen in a lifeless state outside of Stine's old house. Despite that, Sonny Quinn felt uncomfortable with the way they were staring at him and Sam Carter.

The following night on Halloween, the two Gnomes are later brought to life by Slappy the Dummy, using the Tesla Tower to magically bring all of Halloween to life across Wardenclyffe, New York. Chip and Hap are last seen pestering Stine before getting kicked away; it is very likely that they got sucked into Haunted Halloween along with the rest of the monsters.

Like all the other Gnomes, Hap and Chip look like harmless gnomes during the day time. At night, they attack the property of who ever bought them, but their only weakness is the sound of a dog whistle which makes them immobilized whenever they hear it.

In the book, both Gnomes wear bright green short-sleeved shirts, brown leggings, and tall, pointy orange hats. They wear black belts tied tightly around their chubby waists. They have wide, silly grins with brown hair sprouting from their heads. In the episode, Hap wears and blue cap with a red vest and orange shirt. His mouth is pointed up in a toothy scowl. He holds a fishing rod during the day time. Chip has a pointy red hat with a yellow poncho. Both Gnomes wear blue pants and have beady black eyes. Both of them have white beards, with Chips's beard being longer.

Both Gnomes are named after a certain characteristic that distinguishes them from the rest of their kind. For Chip, his name comes from his tooth being chipped. As for Hap, it is because he has a happy expression on his face.

Hap and Chip after being brought to life by Slappy in Haunted Halloween.

Concept art for Hap's appearance in the Goosebumps film.

Concept art for Chip's appearance in the Goosebumps film.

Hap and Chip staring at Sonny and Sam. 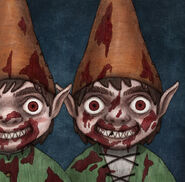 Hap and Chip as depicted on the Korean cover of Revenge of the Lawn Gnomes.

Hap and Chip as depicted on the Spanish cover of Revenge of the Lawn Gnomes.