In the book, Hannah is a very curious person. When she meets Danny Anderson, she believes there's something off about him and that leads to her questioning if he could be a ghost. She tries her hardest to get to the truth by following Danny around. Despite her suspicions, she cares greatly for Danny, and tries to stop him from getting into trouble or giving into the peer pressure of Alan and Fred. When she finds out she is a ghost, she feels lost and guilty. When Danny is about to die in a fire as she did, Hannah selflessly saves him.

In the movie, she seems to have a bit of a rebellious side.

When Danny Anderson moves into her neighborhood, Hannah quickly befriends him. His friends Alan and Fred seem to constantly get him into bad situations, and Hannah fears he could end up in serious trouble. As she follows him around, strange things seem to happen- Danny survives accidents that would seriously hurt most people and the house he just moved into seems empty. Hannah suspects Danny could be a ghost. However, it is revealed that Hannah is actually the true ghost. She saves the life of Danny after he gets trapped in a burning building. Before going to the afterlife with her family, Hannah tearfully hopes that Danny will remember her.

In the film Goosebumps, Stine is Hannah's adoptive father. She is one of his many fictional creations. Hannah loves her father, but dislikes his tendency to be overprotective. She's fully aware she's from a book, but doesn't let it known. She seems to know how her father thinks, and cares a great deal for his wellbeing throughout the film. 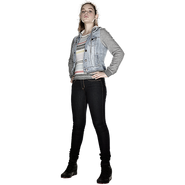 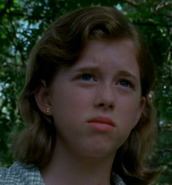 Add a photo to this gallery
Retrieved from "https://goosebumps.fandom.com/wiki/Hannah_Fairchild?oldid=95648"
Community content is available under CC-BY-SA unless otherwise noted.