The Gummy Bears were originally inanimate candies from a bowl with a zombie hand owned by Tommy Madigan's grandmother. When Sonny Quinn and Sam Carter snuck into Tommy's house, Sam immediately snacked on some gummy bears to Sonny's disapproval. He almost woke up Tommy's grandmother when the hand makes noises, though thankfully she was a deep sleeper. Sam also turned the sound feature on the bowl off.

After Slappy the Dummy brought every decoration in Wardenclyffe, New York to life using the Tesla Tower, Sam wanted to get another bite of gummy bears. However, the zombie hand suddenly grabbed him. As Sam shook the evil candy bowl away from him, the gummy bears spilled all over the floor. Sonny then noticed that the gummy bears were alive, as they were seen getting themselves on their feet before fusing together to form larger, child-sized bears. They immediately attacked the two boys and boxed them inside the house. 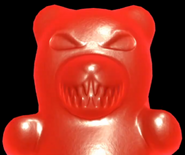 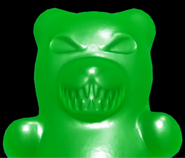 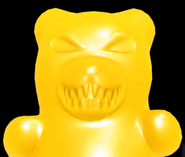 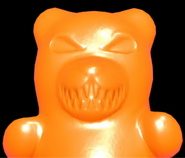 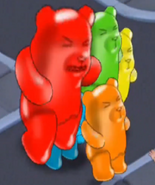 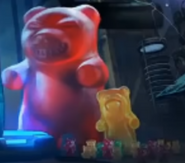 Gummy Bears in the Goosebumps Dead of Night loading screen.

An green,red and orange Gummy Bears attacking the player in Goosebumps Dead of Night.

The Gummy Bears before they attack Sonny and Sam. 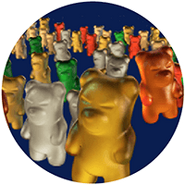