Red
The Grool is the main antagonist in the thirtieth Goosebumps book, It Came from Beneath the Sink!, and its television adaptation.

The Grool is an ancient, mythical creature that resembles that of an old kitchen sponge. It has wrinkly, light brown skin and tiny black eyes. It's round in shape and is slightly bigger than a chicken egg. It gains strength from the bad luck of any people around it, but mainly its owner. The Grool's skin changes color depending on which mood it's currently in. If it's excited, it will turn pink, then tomato red, then back to light brown repeatedly. Should it be angry, it turns purple. The Grool only moves on to a new owner when the previous one dies. It shouldn't be given away, because If the Grool's owner does so, the owner will die within one day. The Grool can't be killed by force or any violent mean of any kind. However, If it's owner shows the Grool enough love for it, the Grool will shrink into a tiny ball and explode.

The Grool is the cousin of an even more dangerous creature known as the Lanx.

The Grool as depicted on the UK cover of It Came from Beneath the Sink!. 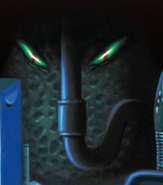 The Grool as depicted on the French cover of It Came from Beneath the Sink!. 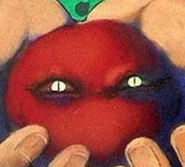 The Grool as depicted on the Japanese cover of It Came from Beneath the Sink!.
Add a photo to this gallery

Add a photo to this gallery
Retrieved from "https://goosebumps.fandom.com/wiki/Grool?oldid=148316"
Community content is available under CC-BY-SA unless otherwise noted.