Goosebumps Wiki
Register
Don't have an account?
Sign In
in: Tales to Give You Goosebumps (characters), Monsters, Change in Size,
and 9 more

Red
Blue
Yellow
White
Green
Gray
The Gronk or simply known as Gronks, are a species of furball toys that are the main antagonists of the first story of More & More & More Tales to Give You Goosebumps, "Don't Sit on the Gronk".

Brad and his older sister, Kelly, are opening their Christmas presents. Brad notices a present that isn't from his parents under the tree, and he wonders where it came from. Regardless of its origin, Brad opens the box. Inside, he finds something that looks like a fuzzy Koosh ball, but he sees it moving. He shows it to his family, and they give him permission to keep it under the condition that he take good care of it.

As it turns out, the creature came with instructions in its box. The instructions refer to the being as a Gronk. Brad, not caring much for instructions, chooses to only read a small portion of the paper. Brad invites his friend Roscoe over, and they play catch with the Gronk outside. While tossing the creature around, Brad drops it, noticing that it feels heavier than before. The creature is growing. It expands to the size of a bowling ball. As the boys continue playing with it, the ball grows to be bigger than a beach ball.

Brad takes the Gronk home, rolling it into his bedroom. The creature grows to the size of a chair, and Brad decides to sit on it, deciding it'll be comfortable. Brad soon notices a problem: the Gronk won't stop growing. Kelly enters, and she is shocked by how large the Gronk has become. She picks up the instructions from Brad's room. The kids begin running as Kelly reads.

The Gronks appearance in the book has been described as a furry Koosh ball that has no eyes nor a mouth. But in HorrorTown, it may not have eyes this time but now it has a huge mouthful of razor sharp fangs and teeth yet still retains it's Koosh ball like appearance from the book.

A Gronk sitting on Brad as seen in the French version of Don't Sit on the Gronk. 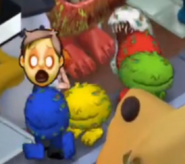 Gronks as they appear in Goosebumps HorrorTown. 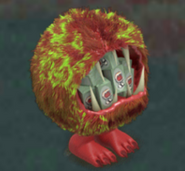 The Gronk Display in Goosebumps HorrorTown.
Community content is available under CC-BY-SA unless otherwise noted.