Brendan Fletcher
Grady Tucker is the protagonist of the fourteenth Goosebumps book, The Werewolf of Fever Swamp, as well as its television adaptation.

Grady Tucker is the twelve-year-old brother of Emily Tucker. The siblings are forced to move to Fever Swamp in Florida so their father, who is a scientist, can study the effects of a Floridian swamp's environment on a group of deer. Dr. Tucker keeps the animals in a pen outside of his family's new house.

The kids eventually meet several residents who live near them: a crazy looking hermit, a local boy named Will Blake, and a weird local girl named Cassie O'Rourke. The Tucker family also finds a dog in the woods, which they keep and name Wolf. Peculiarly, animals in the area begin dying, and the family doesn't know who or what to blame. Local legends suggest that a werewolf might be responsible, and this is ultimately revealed to be true. Will Blake turns into a werewolf and bites Grady, but Wolf appears and attacks Will, scaring him off. Grady falls unconscious.

A month passes, and Grady is staring up at a full moon. When Will bit him, Grady became a werewolf. Now, whenever there is a full moon, Grady goes hunting in the swamp. The book ends with Grady running side-by-side with Wolf into the swamp.

Grady takes after his father; he is very smart and receives high grades in school. He is quite an adventurer and has a sense of humor. However, Grady can become protective, such as when he set Wolf free to prevent the animal from being put down.

In the Goosebumps Graphix adaptation, he wears a bright blue T-shirt, brown shorts and gray shoes. And his hair has been changed to blond. 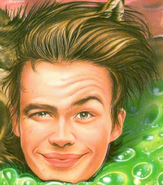 Grady as depicted on the UK cover of The Werewolf of Fever Swamp. 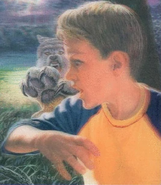 Grady as depicted on the Dutch cover of The Werewolf of Fever Swamp.

Grady as depicted on the French cover of The Werewolf of Fever Swamp.
Add a photo to this gallery
Retrieved from "https://goosebumps.fandom.com/wiki/Grady_Tucker?oldid=151640"
Community content is available under CC-BY-SA unless otherwise noted.