There have been several different iterations of Goosebumps trading cards. Some trading cards were features inside of books in the original series, but many sets were sold as separate promotional material.

Starting with the fortieth book, Night of the Living Dummy III, the original Goosebumps series started including trading cards in the middle of the books. There would be two cards with characters from that book and the following book, as well as a bookmark inside. These cards were only featured in the original series and were never officially released elsewhere.

Topps released a series of trading cards in 1996. The cards came in the following varieties:

The Monster Magic cards, Glow in the Dark cards, and Foil stickers were the rare chase cards in the series and were heavily promoted on the packaging. Art for the story cards were provided by Walter Velez, David Chelsea, Wayne Murray and Zina Saunders. The cards were sold in separate packs, along with complete card sets. The cards were also given away at Discovery Zone as part of a brief promotion. The art for the cards would also be used for the 1996 Merlin sticker set.

Topps was in development of a second series of Goosebumps cards for a fall 1996 release and would have featured more story cards for books including Go Eat Worms!, but the series was cancelled without any explanation. Only one promotional card was released.

Various packaging of Frito-Lay products included information for a mail-in offer to receive a total of eight Glow-in-the-Dark cards (not to be confused with the Topps glow-in-the-dark cards). When arranged correctly, the back of the eight cards formed a single image. 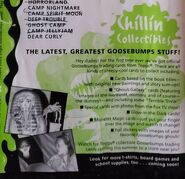 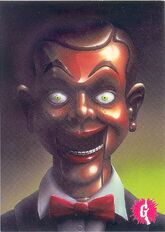 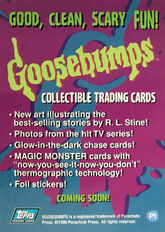 Slappy Series One promotional card (back). 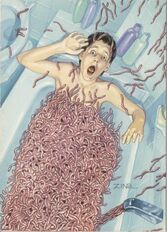 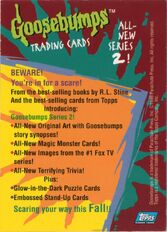 Promo card for unreleased series 2 (back).

MM #5 The Cuckoo Clock of Doom

MM #6 Return of the Mummy

G3 #7 Night of the Living Dummy

All the glow in the dark trading cards put together.

#40 Night of the Living Dummy III

#43 The Beast from the East

#47 Legend of the Lost Legend

#48 Attack of the Jack-O'-Lanterns

#55 The Blob That Ate Everyone

#56 The Curse of Camp Cold Lake

#57 My Best Friend Is Invisible

Cards for many Goosebumps books.