Goosebumps HorrorLand Fright Show was an attraction at Disney's MGM Studios in Walt Disney World and ran from October 8, 1997 to November 1, 1998.

The show starts like the TV show opening, with a man in black clothing walking with a suitcase as the theme song plays. After the man goes behind the curtain, Amaz-O the Magician pops out to start his magic act. He calls up two kids from the audience to do his arm cutting trick. After successfully completing the trick, Amaz-O has the kids try another trick where they step into a box with a lowering layer of spikes. While the kids are inside, Amaz-O is unable to open the door in time to let the kids out.

After the spikes raise back up, Amaz-O opens the door to reveal Slappy inside. Amaz-O demands an answer for where the kids are, as Slappy replies by saying that he will make the audience his Slaves. Amaz-O tries to make Slappy dissappear, but instead makes Curly the Skeleton appear above the stage. Curly then announces the arrival of the Mummy of Prince Khor-Ru as he appears from the stage. Slappy and Khor-Ru attack Amaz-O, throwing him into a cage. The monsters then do a little magic trick of their own on the cage which makes Cuddles the Hamster appear from the cage.

Curly announces that he and his monster friends will keep the audience prisoners, until the Terror Tower Executioner and two Haunted Masks come out from the curtain and scare Slappy, Curly, Prince Khor-Ru and Cuddles away. It is then revealed that the Executioner is actually Amaz-O in disguise and the two kids take off the Haunted Masks as they are safe. Amaz-O then tells the people to check out the Goosebumps Funhouse and the show ends.

An advertisement for the show. 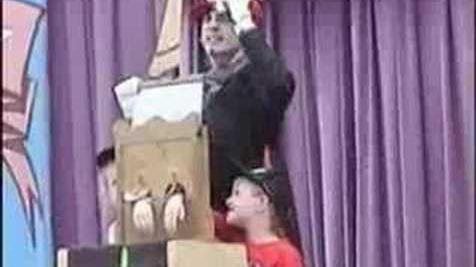 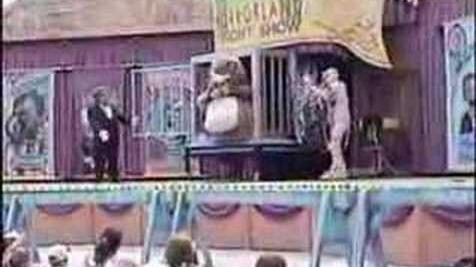 Retrieved from "https://goosebumps.fandom.com/wiki/Goosebumps_HorrorLand_Fright_Show?oldid=120097"
Community content is available under CC-BY-SA unless otherwise noted.