The protagonist receives a ticket to HorrorLand in the mail, not knowing why it was sent to him. Their friend Nate then appears and states that he too received a ticket through the mail. But he is not too worried about it and is very happy to get to go to HorrorLand. The protagonist asks their mother if they could go and they get dropped off at HorrorLand.

As they arrive, they find a monster at the Front Entrance. Nate questions it to be someone as a swamp monster. The guy in the costume says that he is a "Horror" as in "HorrorLand." The protagonist says he has a great costume and the Horror lets them in, and then he laughs suspiciously. After a while at the Carnival of Screams, they both go to Vampire Village once they made the Fright Restriction, where the rides are more "fun."

The protagonist feels nervous and suggests that they should go back to the ride Calamity Canyon. Nate runs to a fake coffin and starts to act strangely. He acts as a vampire, lays onto the coffin, and it closes on him. The protagonist struggles to open the coffin until it opens on its own and Nate disappears.

At Mad Labs, the protagonist gets a Horror mask from a mask shop. Coincidentally, the mask was the shop owner's last one. As they put the mask, the protagonist says it feels like skin. When it gets stuck on their head, they start to feel funny until they transform into a Horror.

In the Secret Tunnels, the protagonist gets caught by the lead Horror Horrifico, know sees the Horror as an impostor. Using his magic, he changes them back into their human form. The protagonist says that they are getting out of HorrorLand, revealing that they have all the pieces of the ticket, because the park is "nuts" and "evil." Horrifico is busy mocking the protagonist until they blind him with Evil Dust and runs off.

After riding Certain Death in Terror Tombs, the protagonist, Nate, and Gigi crash and fall off their cart. Nate says that HorrorLand might not be a real amusement park. The protagonist looks at Gigi, who starts to sound different. Suddenly, she transforms into the Great Gargantua, who thanks the protagonist for setting her free. After revealing her plans to make the whole world her own "HorrorLand", she escapes.

5 main areas are featured in this game, they are:

For a more detailed analysis of the Monster Cards, such as how to unlock them, please see Goosebumps HorrorLand (video game)/Monster Cards.

There are 26 Monster Cards to collect, each one using a different Goosebumps cover on it. 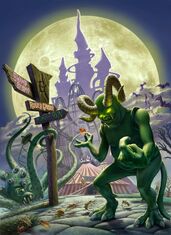 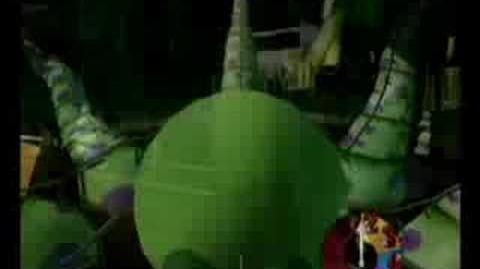