Tim Jacobus
Goosebumps Gold is a cancelled book series that was intended to follow Goosebumps Series 2000, with a planned launch in October 2000. However, the series was cancelled early in its production.

In an interview, author R.L. Stine stated that none of the Goosebumps Gold books were ever written.[1]

Early in the year 2000, it was announced that R.L. Stine would be teaming up with HarperCollins Children's Books to create two new series: Goosebumps Gold and The Nightmare Room.[2] According to reports, HarperCollins was planning an "extensive marketing campaign" for Stine's upcoming work. Cover artist Tim Jacobus even promoted the series on his website, going as far as to share some art for the series.[3]

For unknown reasons, possibly licensing issues, Goosebumps Gold was canceled early in its production. The series cancellation was never disclosed to the public or cover artist Tim Jacobus. After the October 2000 release date passed, Jacobus changed the release date on his website to "2001"[3] and "late 2001"[4] because he thought the series was still going to release, which it never did.

Goosebumps Gold was planned to be a "limited series of 12 books,"[5] but only three book titles are known: The Haunted Mask Lives!, Happy Holidays from Dead House, and Slappy New Year. The plot details for all of these books are unknown, as the books themselves were never written. A book titled Slappy New Year! was released as the eighteenth book in Goosebumps HorrorLand series, but other than the title, the book has nothing to do with the Goosebumps Gold version.[6]

Series veteran Tim Jacobus was commissioned to create the art for Goosebumps Gold, around six months after he finished his work on Series 2000. Unlike his previous work, the Gold covers were created digitally. The artwork for The Haunted Mask Lives! was completed on January 12, 2000, and Happy Holidays from Dead House was completed on January 28.[7]

In October 2018, a listing related to The Haunted Mask Lives! surfaced on eBay, showing a mock-up cover for the book, which was signed by Tim Jacobus and R.L. Stine.[8] In December 2019, the cover along with a mock-up cover for Happy Holidays from Dead House were released on the internet. As with the art, the cover design and logo were created by Tim Jacobus. The covers were created on January 31, 2000.[7]

The cover template somewhat resembles the original series' template, with the series logo and title of the book being on the top and bottom respectively. Though, the aesthetic resembles that of torn-up paper rather than slime. The top and bottom of the cover base along with the logo feature different contrasting colors from each other. 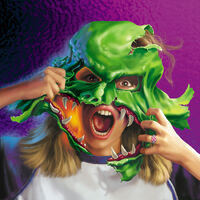 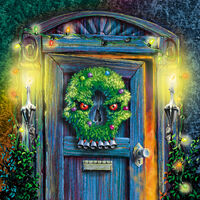 A sketch of Slappy's head that was featured on the Goosebumps Gold page on Tim Jacobus' website. The art is unrelated to Slappy New Year. 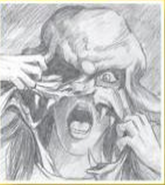 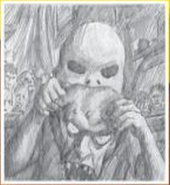 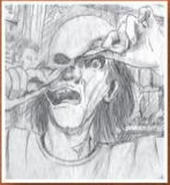 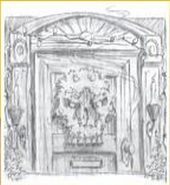 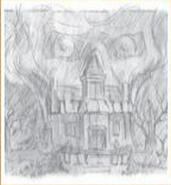 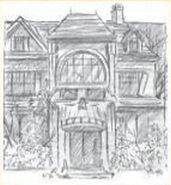