Goosebumps Wiki
Register
Don't have an account?
Sign In
Advertisement
in: Book Series, Books Released In 1995, Books that came with merchandise

Goosebumps Collector's Caps were promotional books released to accompany Goosebumps "caps" which were POG-like milk-caps. Each cap features art from the covers of Goosebumps books. The books also contained various games and activities, such as cross word puzzles, word searches, fill-in-the-blanks, quizzes, matching, and pages letting you "write your own scary story."

Both books provide new facts on several Goosebumps books, such as the backstory of the ghost in Jerry's house in Piano Lessons Can Be Murder and the backstory of the man who created The Haunted Mask. In the second book it was revealed The Horror at Camp Jellyjam was originally going to titled "Smelly Summer". Both books were also sold along with a Curly the Skeleton "Slammer."

Although the books are credited to R.L. Stine on the cover, Stine is addressed in third-person throughout the books. 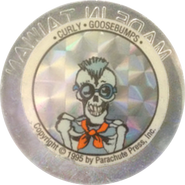 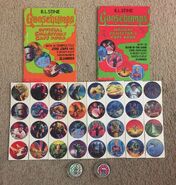 #2 Stay Out of the Basement.

#7 Night of the Living Dummy.

#8 The Girl Who Cried Monster.

#13 Piano Lessons Can Be Murder.

#14 The Werewolf of Fever Swamp.

#20 The Scarecrow Walks at Midnight.

#24 Phantom of the Auditorium.