Giant Praying Mantises are insect-like monsters that appear in the thirty-fifth Goosebumps book, A Shocker on Shock Street.

During the monsters' attack on the school, the Giant Praying Mantis attacks a teacher that was closest to a window. The Mantis then knocks over a school bus Stine is believed to be in and aviods getting temporaily blown up like the other monsters. During the final battle, the mantis knocks the Ferris wheel off with Zach, Hannah, and Champ in it, they survive. Finally, the Mantis is sucked in the book along with the rest of Slappy's monster army.

In the book, the mantises are described as being three times the height of Erin (which, given her age, would put them somewhere between twelve and fifteen feet high) with silvery exoskeletons. They possess a tongue, unlike real mantises, as well as the ability to spit sticky, hot tar-like substances, presumably to ensnare prey. As with every other horror in the book, the mantises are animatronic.

In the movie, the mantis is apparently the only one of its kind and considerably larger (at least fifty feet high when reared up). Its anatomy is more in-line with real insects, lacking the tongue, and sporting the green coloration typically associated with praying mantises. Though never stated one way or the other, the mantis seems to be biological now, suggesting that it's borrowed from the book's cover, rather than the text itself. 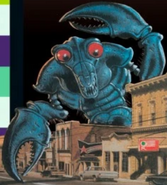 One of the Giant Praying Mantises as depicted on the French cover of A Shocker on Shock Street. 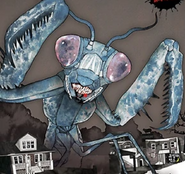 One of the Giant Praying Mantises as depicted on the Korean cover of A Shocker on Shock Street.
Add a photo to this gallery

Retrieved from "https://goosebumps.fandom.com/wiki/Giant_Praying_Mantises?oldid=135577"
Community content is available under CC-BY-SA unless otherwise noted.