The Incredible Shrinking Fifth Grader
Ghost in the Mirror is the twenty-fifth and final book in the Goosebumps Series 2000 book series. It was published in 2000.

Originally, this book was going to be followed by The Incredible Shrinking Fifth Grader. However, the series was canceled before the book could be released, making Ghost in the Mirror the final book in the series.

The cover illustration depicts a mysterious, bony hand emerging from a mirror. The hand appears to be semi-transparent. The area in the mirror where the hand emerges from appears to be rippling.

Jason Sloves is always being pranked, scared, and teased by his sister, Claudia. One day, Claudia makes fun of Jason's bedroom for being babyish, but his parents have been reluctant to pay for updates, as Mr. Sloves has been unemployed for over a year. However, two weeks later, Jason is gifted an antique wooden dresser and a large mirror. Jason invites his friend, Fred, over. The boys play video games, Jason notices that the mirror is oddly smooth and very bright. But Fred is distracted when he thinks he sees something moving in the mirror. Fred eventually leaves, and Jason finds a note lying on the floor beside his new furniture. The note says:

"BEWARE. BRING THIS INTO YOUR HOUSE — AND YOU BRING DEATH!"

Jason assumes this note was a trick planted by his sister and tries to move on. However, Jason's fears are worsened when he finds his dog, Buzzy, barking at the mirror for no discernible reason. Jason discusses this occurrence with his parents over dinner, but the group hears what sounds like at least two dogs growling upstairs. Jason goes up to his room and Buzzy attacks the boy, biting his neck. Jason's dad grabs the dog and places it in the garage.

Jason invites Fred over again, and the boys play more video games. Suddenly, the boys see Buzzy's reflection in the mirror. They try to show Claudia, but the dog's image vanishes. Jason briefly goes downstairs, but — when he returns — Fred is gone. Jason figures he went home, so he goes to bed. At night, he hears what sounds to be a dog whimpering coming from his mirror.

The next day at school, Jason sees Fred in the locker room before gym class. Fred doesn't give an explanation for why he left abruptly. The boys are brought outside for a game of soccer, and Fred plays aggressively, which is unusual for the typically clumsy boy. After the game, Jason compliments his friend, saying how his performance made him seem possessed. Fred becomes enraged by this remark and begins punching Jason. At the nurse, the nurse mentions Fred’s abnormal strength, and says that Jason looks as if he was in a car wreck. She tells Jason that Fred is suspended, and Jason goes home. Jason looks in his mirror and sees the image of Buzzy and Fred. That night, he hears breathing, except it isn’t his. He first thinks it’s Claudia, but he then realizes that it’s coming from the mirror. Jason then sees the image of Fred, whose face looks sad. Jason then listens as Fred’s image asks for help, before his hands burst from the mirror, and pulls Jason in by his arms.

Jason winds up on the floor with scratch marks on his arm. A ghostly version of himself appears in the mirror and beckons him in. Suddenly, Fred calls from inside the mirror, telling Jason not to enter. Suddenly, the ghostly image of Jason turns into a hideous monster with crab-like claws. The creature reaches out and grabs Jason and pulls him in. Jason, now in a mirror-dimension, is informed by the monster that it intends to take his place in the real world. Jason sees more monsters in the mirror dimension, and he accidentally backs up and falls through the mirror, landing back in the real world.

Jason calls his parents in, hoping to show them the mirror's true nature, but the mirror appears completely normal when they arrive. The next morning, Jason sees that a hole has been chewed in the garage door, and Buzzy is gone. The boy rides his bike and looks for Buzzy, but he finds Fred lifting a car over his head. Jason realizes Fred and Buzzy have been replaced by monsters, and — in order to save the real ones — he'll have to return to the mirror-dimension.

Late at night, the mirror clouds, and Jason is able to enter. He falls into a hall of mirrors and sees Fred and Buzzy. However, Jason can't seem to break the glass to get out. He pulls out his pocket mirror and tries to use it to break the glass, but this doesn't work. He ends up pointing the small mirror at Fred, which clones the boy. Jason creates five clones of Fred, but even their combined effort can't break back into the real world. Jason points his pocket mirror at the original mirror, and the glass begins to sizzle. Jason, Fred, and Buzzy fall into the real world, but the monster that wanted to replace Jason appears and tries to attack Jason. Jason rips out the creature's eyes and shoves the creature into the mirror-dimension. Jason then picks up a lamp and hurls it at the mirror, destroying the dimension's entry point.

While cleaning up the broken mirror, Jason finds the warning note from earlier and decides to throw it away. Suddenly, a large, hairy, snake-like creature emerges from his wooden dresser, and the monster asks if its note was received. 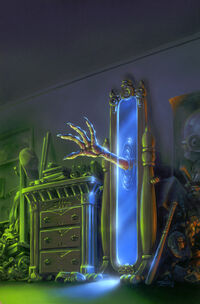