A ghost dog as depicted on the UK cover of The Barking Ghost. 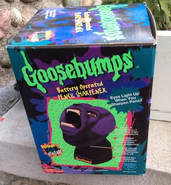 Halloween greeting card. (front)
Are you Gonna Have a happy Halloween?

Halloween greeting card. (inside)
Or am I gonna have to come over there and DROOL on you?