Be all that you can't see!

How to Kill a Monster
Ghost Camp is the forty-fifth book in the original Goosebumps book series. It was first published in 1996.

This book received a spiritual successor titled Return to Ghost Camp, which is the nineteenth book in Goosebumps Series 2000. Despite the title, it actually has nothing to do with this book.

The cover illustration shows a girl following invisible ghost campers as lightning strikes in the background.

THE JOKE'S ON THEM!

Harry and his brother, Alex, are dying to fit in at Camp Spirit Moon. But the camp has so many weird traditions. Like the goofy camp salute. The odd camp greeting. And the way the old campers love to play jokes on the new campers. Then the jokes start to get really serious. Really creepy. Really scary. First a girl sticks her arm in the campfire. Then a boy jams a pole through his foot. Still, they're just jokes...right?

Brothers Harry and Alex Altman are on a bus traveling to Camp Spirit Moon. Alex, a talented singer, is sad that his parents didn't sign him up for a music camp. The bus stops eventually, and the boys get off. After a short walk, the boys arrive at their camp, but they don't see any other campers and become worried. A camp counselor, later revealed to be Chris, approaches the boys and explains the brothers had been the subjects of a camp prank; the other campers were actually just hiding. Chris introduces the boys to Uncle Marv, the giant man who runs the camp. Uncle Marv alludes to a test that will take place at the camp's campfire gathering later that night.

Uncle Marv takes the boys their cabin, and they unpack. They notice a strange blue liquid pooling in multiple places on the floor. After unpacking, the boys go to the camp's campfire. A girl named Lucy greets Harry, and the two begin roasting hot dogs. Harry's hot dog falls into the fire, and, to Harry's shock, Lucy unflinchingly retrieves it. Uncle Marv guides the campers in a song. Alex sings well, but his new friend, Elvis, sings horribly. Harry steps away from the campfire. Lucy appears and begs Harry for help. Uncle Marv interrupts and calls both kids back to the campfire. Uncle Marv begins telling a ghost story about a group of campers who wanted to spend a night in the woods. The group stopped and set up their tents, but they heard thumping noises. The group realized that they were camping on a giant monster, and the monster ate them. Next, Uncle Marv tells the story of a ghost camp. A mysterious fog settled over an entire camp and turned everyone there into ghosts.

Harry is shocked when he sees a dark fog descending on the camp. Uncle Marv begins leading another song. Suddenly, Harry notices that everyone except for his brother has disappeared from the campfire. Harry assumes that this is another joke. This is confirmed when the boys head back to their cabin and find other campers. Harry enters his cabin and sees more puddles on the floor. Harry lies down in his bed and tries to rest. Harry wakes up and thinks he sees Joey floating above his bed. When Harry turns on the lights, Joey is not floating.

The next day, Harry goes to the soccer field and practices setting up tents alongside Sam and Joey, two of his bunk-mates. Sam and Joey start wrestling. Sam steps on a tent pole, and Harry sees the pole goes through his foot. Sam pulls it out and says that the pole missed his toes. Later, Harry goes to the mess hall. Joey scares Harry by stabbing himself in the neck with a fork. Joey says that this is a trick, but he never explains how he did it.

During a camp soccer game later in the day, Harry and Alex talk about some of the weird things that they've witnessed. Harry suddenly sees a girl get hit in the head with a soccer ball. Harry think that he sees the girl's head fly off, but she is fine when he goes to check on her. Harry goes back to his cabin, and Alex follows him. Alex tells Harry that he also saw the girl's head fall off. The boys hear wails coming from the woods. The boys start running, but they stop when they see Elvis, Sam, and Joey making the howling noises.

The next day after dinner, Uncle Marv leads the campers on a night hike. Near the end of the hike, Lucy pulls Harry aside. Lucy reveals that Uncle Marv's second ghost story was true; all of the campers at Camp Spirit Moon are ghosts. Harry touches the girl's hand and feels that it's icy cold. Lucy explains that the blue puddles in the cabin are protoplasm that the ghosts create when they appear. A mist surrounds Harry as Lucy tries to possess him. Harry forces Lucy out of his mind, and he runs back to the cabins. Harry finds his brother and drags him outside. Soon, the brothers begin running into the woods.

Harry tells Alex that all of the other campers are ghosts, but Alex says that he already knew that because had Elvis told him and previously tried to possess his mind. Once they're deep in the woods, the boys hear strange noises. The ground begins shaking, and a giant monster begins rising up beneath them. Both boys begin chanting together, saying that they don't believe in the monster, hoping that this will defeat the monster. The monster picks up the boys and eats them. However, instead of falling into its stomach, the boys fall to the woods below. The monster has vanished, and the boys are happy that their chant worked.

Suddenly, campers and counselors appear and surround the boys. Uncle Marv instructs the ghosts to take the boys back to camp so their bodies can be possessed by spirits. The boys begin their chant of disbelief again, but Lucy explains that the monster was a trick created by the spirits. Before Lucy can possess Harry, all of the ghosts begin fighting over who will get to leave. As the ghosts fight, they begin blending together into a smokey mist.

The mist floats away, and the two boys begin running in search of a nearby highway. As the boys run, Harry hears Alex humming a song. Harry stops running and demands to hear more of the song. Alex continues singing, but his singing sounds horrible. Harry deduces that Elvis possessed Alex's body. Elvis promises that he will never sing again if Harry will keep the possession a secret.

Be All That You Can't See! T-shirt detail.

Be All That You Can't See T-shirt. 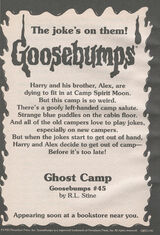 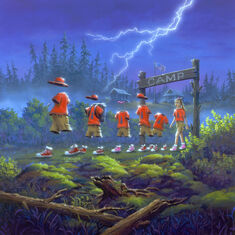 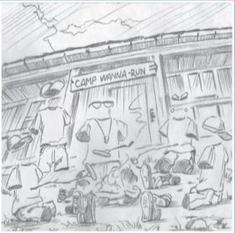 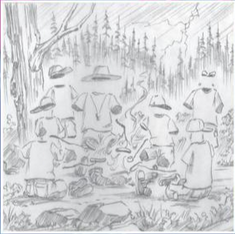 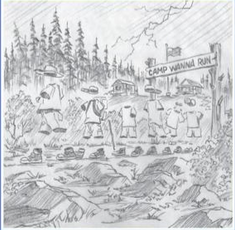