No swimming. No surfing. No haunting.

Return of the Mummy
Ghost Beach is the twenty-second book in the original Goosebumps book series. It was first published in 1994.

Both the original 1994 and the 2010 Classic Goosebumps cover illustrations feature a hooded ghost emerging from a tombstone in a graveyard near a beach.

DO YOU BELIEVE IN GHOSTS?

Jerry can't wait to explore the dark, spooky old cave he found down by the beach. Then the other kids tell him a story. A story about a ghost who lives deep inside a cave. A ghost who is three hundred years old. A ghost who comes out when the moon is full. A ghost who is haunting the beach. Just another stupid ghost story. Right?

Siblings Jerry and Terri Sadler have been invited to spend the last few months of summer in New England with their distant cousins Agatha and Bradford Sadler. The two start off their trip by investigating a nearby cemetery. Terri enjoys etching the tombstones, but Jerry is eager to explore the beach. While there, they come across a trio of siblings named Sam, Louisa, and Nat. They are surprised to discover the three share their surname of Sadler, but are told by Sam that it is a common name in the area. Terri asks them about the cave near the beach, and the three siblings grow quiet in fear. Louisa asks Jerry and his sister if they believe in ghosts, and Terri is quick to say no. Jerry's interest is peaked, and he asks Louisa is a ghost lives in the cave. However, she reveals no further information, and the trio leave, with Sam seeming angry that his sister brought up the ghost in the first place.

The following morning, Jerry and sister enter the woods in search of a special kind of flower. To Jerry's horror, he comes across the skeletal remains of a dog. Their examination of it is cut short by the appearance of the three Sadler siblings. Nat tells them a ghost killed the dog, as dogs bark to warn about ghosts. Terri tries to calm him, but Sam tells her that skeletons just like the dogs can be found all across the woods because of the ghosts.

The next morning, they are back on the beach collecting shells. The trio arrives once more, and Terri questions them further about the ghost. They are still hesitant to say anything, but Nat accidentally reveals that the ghost lives in the cave. Louisa tells them that the spirit has been said to live there for over three hundred years, but nobody has ever actually seen it. Sam reveals that a light can be seen flickering in the cave, and the trio departs once more.

That night, Jerry sneaks out, hoping to catch a glimpse of either the ghost or the light Sam mentioned. He begins climbing the rocks. To his surprise, he sees a ghostly light floating in the cave entrance. Before he can investigate further, he discovers Terri has followed him, and the flickering light has now gone out. Jerry asks Brad and Agatha about the light the following night at supper. Brad tells them he was simply seeing the northern lights. Jerry is unconvinced, and heads back to the beach with Terri. The light begins to glow once more, and they decide it is finally time to enter the cave.

They enter and find dozens of lit candles on the rock ledges. They turn to see an old man with stringy white hair. He tells them to "come here" in a raspy voice, but the two flee before he can do anything. They tell Sam, Louisa, and Nat of their encounter and the three are amazed. Louisa tells them that the ghost is dangerous, but there is a way to stop him. Louisa tells Jerry and Terri to meet them on the beach the following morning so they can discuss the plan.

When morning comes, Jerry finds himself back in the cemetery. Upon further inspection, he sees practically all the tombstones belong to Sadlers. Terri is shocked to discover that three lined up gravestones that bare the names Sam, Louisa, and Nat. The two run back to the cottage to ask Brad and Agatha about the tombstones. Agatha tells them that in the winter of 1641, a large group of Sadlers sailed from England in hopes of starting a new, better life. However, the winter that followed their arrival was so horrible it ended up killing nearly all of the Sadler family. She reveals that the trio of siblings are distant cousins, much like them, and that they simply share the names of their ancestors.

Jerry and Terri regroup with Sam, Louisa, and Nat on the beach. Louisa reveals her plan to trap the ghost inside the cave. Her plan involves pushing the large rocks on top of the cave in front of the entrance, which will be able to seal the ghost inside the cave forever. Jerry is hesitant to go along with the plan, but Terri instantly agrees to help trap the ghost when night comes. When it does, Jerry and his sister enter the cave once more and stumble upon the old man from their last encounter. The plan to trap him fails, and the Sadler trio runs off in fear, leaving Jerry and Terri alone with the ghost.

The man reveals himself as Harrison Sadler and tells them he is not a ghost. He explains that Sam, Louisa, and Nat are the true ghosts. Harrison reveals that he traveled here from England studying ghosts and the occult. He tells them that he's studied their evil for years and stays in the cave hoping to one day seal the spirits inside. The two are unsure if they should believe him, and are told to look in the eastern corner of the graveyard if they want proof of his story. They do as he says, and discover fresh graves with their names on them. They run into Sam, Louisa and Nat once again, and they apologize for leaving them behind. Louisa tells Jerry and his sister that they need to try and trap the ghost one more time. Jerry is reluctant, but Terri is again eager to help.

Terri leads the lot of them to the entrance of the cave. Harrison Sadler emerges, happy that they brought the ghosts to him. The trio of kids and Harrison begin arguing over who is really a ghost. Harrison's dog appears, and it begins barking loudly at Sam, Louisa, and Nat. The three finally reveal themselves as the ghosts. They tell Jerry and Terri that they were among the Sadlers who arrived in the winter of 1641. Sam tells them they never had a chance to live. Louisa begs them to stay, and Sam tells them he dug fresh graves for them. Jerry, Terri, and Harrison stagger back when suddenly, the rocks on top of the cave all tumble down in front of the entrance. Jerry realizes Harrison has sacrificed himself in order to trap the ghosts for good.

Jerry and Terri make their way back to the cottage and tell Brad and Agatha of their encounter, and they are glad the children are safe. Suddenly, Harrison Sadler's dog bursts into their house and begins barking at the couple. Jerry and Terri realize Brad and Agatha are also ghosts. Agatha turns to her husband and asks him what they should do with the kids now that their secret is out.

Chinese (Bundled With The Barking Ghost) 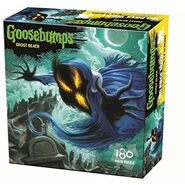 Puzzle based on the "Classic Goosebumps" reprint of the book. 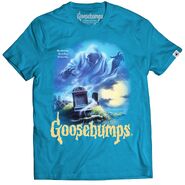 Ghost Beach was adapted into an episode of the Goosebumps TV series. It is the ninth episode of season two, and the twenty-eighth episode overall.

Ghost Beach was adapted into a Goosebumps Graphix story in July 2007 by Ted Naifeh, as the second story in Scary Summer. It was rereleased as the third story in Slappy's Tales of Horror in September 2015. 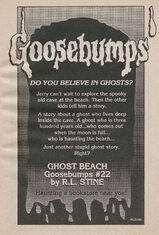 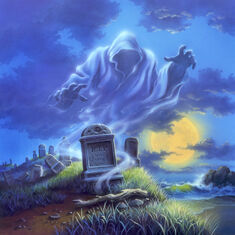