Black
The Gargoyle is a creature from "I'm Telling!", the fourth short story from Even More Tales to Give You Goosebumps.

It's a creature that has the power to use it's saliva to turn anything to stone. Adam discovers it, and notices its powers. He takes some of its saliva in a water gun, and he tests it on a tree, and it works, but he uses the saliva on his sister, turning her into a statue. Adam later fought the gargoyle and managed to turn it back into a statue and unfroze his sister. However, he froze her again after she said she would tell on him.

The Gargoyle can be found outside the window in the master bedroom in Dead House. The player must collect some of its saliva in a container, and use it to turn the Monster Blood into stone to stop the attic from shrinking.

The Gargoyle's drool contains the power to turn whatever comes in contact with it to stone. The saliva can also bring stone beings back to life. It has wings, granting it the ability to fly. 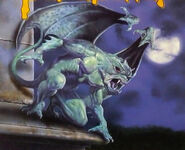 The Gargoyle as depicted on the Spanish cover of Even More Tales to Give You Goosebumps. 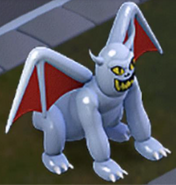 The Gargoyle as it appears in Goosebumps HorrorTown.
Community content is available under CC-BY-SA unless otherwise noted.