Slappy's Nightmare
Full Moon Fever is the twenty-second book in the Goosebumps Series 2000 book series. It was published in 1999.

The cover illustration depicts an unspecified beast in a forest wearing ripped pants with the full moon in the background.

Robbie and his sister Alesha are visiting their Grandpa John at his cabin in the woods, which they don't want to go because they hate his scary stories that keep them up at night. He tells a story about Full Moon Fever, a mythical illness which turns anyone who looks at the full moon into ravenous, snarling beasts. He heard about it from a woman he met after getting lost in the Canadian wilderness. After he pretends to have caught it as a joke, they brush the whole thing off and try to forget about the story.

On Halloween night, Robbie and Alesha go trick-or-treating around town. They reluctantly visit the home of one of their nastiest teachers, Mrs. Eakins, who they'd recently upset by kicking a soccer ball through her window. When they arrive at her home, however, they are surprised to find that the usually mean Mrs. Eakins is being so friendly. Mrs. Eakins generously gives them both full-size candy bars which the two gobble up on the way back. Robbie suggests that they should prove if Grandpa John's story is true, by looking at the full moon. So, they do exactly that, but start to feel sick.

The next morning, Robbie discovers that he is completely coated in thick hair. He goes to see if Alesha has turned into a beast like he has, and unfortunately, she has. They call for their mom, but she doesn't recognize them. They escape the house when their mom begins to call the police. They find they have an immeasurable hunger. After regaining their speech, Robbie and Alesha plan what to do. They worry that they have succumbed to Full Moon Fever. Robbie and Alesha go to find their Grandpa John, who told them about the disease the night before, only to discover that it is merely an old legend and that it isn't real.

The two travel to Canada to find a cure and meet up with the woman who told John the story, but she tells them she made it up and has no idea what to do. However, there is a man named Dr. Thorne that she thinks may know something. They go to him and seemingly meet his son, only for it to be revealed that this is Dr. Thorne, who pretends to be his son as he doesn't have one. He then turns out to be evil as he captures the kids and turns them into circus freaks. After spending a few weeks in captivity, they eventually escape the circus and try to change back under a full moon, only to find it has no effect.

They return home with Grandpa John and find Robbie's Halloween candy, including a "Best" bar that actually says "Beast Bar", leading Robbie and Alesha to discover that the candy bars Mrs. Eakins gave them were actually cursed and she is a witch. Robbie and Alesha go to Mrs. Eakins' home and attack her after ransacking the house. They eat many "Cure Bars", which were lying around the house and hope that they will cure them. Mrs. Eakins then curses them to shrink and they start to shrink. Robbie takes another look at the label and discovers that it actually says "Curse Bar", meaning that they have just likely permanently cursed themselves. 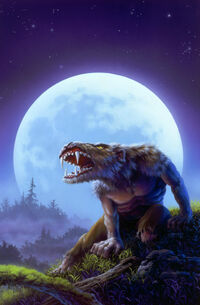