Goosebumps Wiki
Register
Don't have an account?
Sign In
in: Books, Goosebumps Most Wanted, Animals,
and 11 more

Dr. Maniac Will See You Now
Frankenstein's Dog is the fourth book in the Goosebumps Most Wanted series. It was published in 2013.

The cover illustration depicts a cute, yet horrifying, stitched up dog.

Kat is reluctant to visit her uncle Vic Frankenstein because of all the rumors about him. But Kat is relieved to find that even though he lives in a dark, old castle-like mansion, Uncle Vic is a quiet, gentle man, a scientist interested in building robots with artificial intelligence. Also, Kat loves Poochie, Vic's small, adorable, fluffy white dog. But after an accident occurs in her uncle's lab, strange things begin to happen. Has Kat created a monster? Or is something else responsible for the horror that is unleashed?

Kat Parker is visiting her Uncle Victor Frankenstein in a tiny old village. He has frequently visited her but this is the first time she's going to his home. She wants to do a video blog on her experience with him for a school project. When she arrives, some villagers tell her to go home as they believe he makes monsters, just like his great-grandfather before him.

A boy named Robby arrives to pick her up on Victor's behalf and takes her to his creepy old mansion. In contrast to what the villagers told her, Victor is a nice friendly man that even has a sweet fluffy white dog named Poochie. He's less interested in monsters and more involved in creating robots with artificial intelligence.

He brings out one he made named Frank, who is very lifelike and can think on his own. He's not perfect however, as he occasionally glitches out. The next day, Kat and Robby are exploring the house when they stumble on his lab where Robby wants proof of Frank's existence. Kat turns him on, but he tries to escape. Kat manages to turn him off while Victor's vicious guard dogs scare him, and they put him back in the lab.

Poochie starts running around and causes some strange liquid to spill on him, which makes the dog grow. They are able to clean the gunk off and the effects wear off quickly. Kat wants to get some footage of this event for her video blog, but her phone has been destroyed by someone. She tells Victor about this and he theorizes that it simply fell off her bed stand, even though had no way of knowing that she kept it there. He also warns her to not leave her room at night.

That night, she thinks she hears Poochie out in the halls but it's actually a man who claims to be her Uncle Victor but looks slightly different. The real Victor comes in and reveals that this Victor is actually a robot, one of his past failures. The next morning, Kat wants to mail a letter to his parents, and Victor offers to do it for her.

After she finishes her breakfast, she starts to sneak out to the village and finds her letter in the trash. Later that day, Kat and Robby go back to Victor's lab to find out what is really going on. They find an activated Frank who says he is supposed to keep out intruders. He grabs Kat's arms but Robby is able to headbutt Frank to get him off her.

Frank is angry at this act of violence as violence goes against his programming. Victor comes in and turns off Frank. He reveals that he has cameras planted around the house and that he saw the incident with Poochie. He explains that he created some robots that had a copy of his brain waves but they started to think they actually were Victor and became too smart for their own good.

They tried to take over his life and while he was able to lock them up, some have escaped like the one Kat saw in the halls. Some even made it to the village, which is why the villagers fear him. Victor then reveals he has been planning to make a robot version of Kat using her brain waves.

Kat is knocked out by something he put in some cookies he gave her and she wakes up to see that there are wires attached to her and the in progress robot. Another Victor breaks out of the failure room where all the robot Victors are kept and claims to be the real Victor and that the other one is the robot. Both of them demand that Kat help get rid of the other one.

She lets Poochie decide as he knows Victor the best. He seemingly picks the one that has been trying to make a Robot Kat and they lock up the other Victor. But it turns out the dog was just reaching for his power switch, and the one that ran out of the failure room was indeed the real Victor.

Kat and Robby quickly turn off Robot Victor and head into the failure room where all the robots within claims to be the real one. A man in a black suit walks in and reveals himself to be the real victor, who had actually been in France all week and got the visiting date wrong. Victor is finished with robots, as he can never get them to work right. He's more focused on cloning, as he was in France showing off clones of Poochie. He suggests making clones of Kat and they both laugh at the idea. 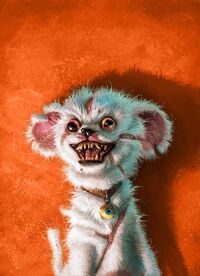