Female
Fifi is a poodle first appearing in the fifteenth Give Yourself Goosebumps, book Please Don't Feed the Vampire!.

She is the reader's pet dog. One story details Fifi biting the packet of red goo inside the Vampire in a Can costume, which transforms her into a ferocious vampire poodle.

One bad ending has Fifi trying to save the reader from the vampire animals from the pet shop, but they overtake the reader and drain all of your blood.

Fifi appears in the film Goosebumps. She attacks Lorraine Conyers on her doorstep. Lorraine manages to get away from her. She also appears later in the film when the monsters were going to get Zach, Hannah and Champ on top of the Ferris wheel at the abandoned amusement park where she was shown floating near the Body Squeezers.

In the book, Fifi is described as a big black poodle who grows long fangs after drinking the blood in the packet.

In the film Goosebumps, Fifi is somewhat smaller in size, has white fur, and wears a pink collar around her neck and a pink flower on her head. When she transforms into a vampire, her eyes become red and sharp fangs appear on her mouth.

Fifi retains her white-furred design in various other Goosebumps media including Goosebumps: The Game and the Classic Goosebumps reprint, the latter of which adds a mole on her right cheek.

Fifi as she appears on the cover of the Classic Goosebumps reprint.

Fifi as she appears in the Goosebumps movie.

Fifi as seen in the "Please Don't Feed the Vampire" loading screen for Goosebumps HorrorTown. 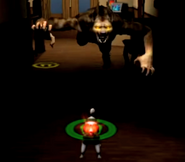 Fifi spotting the player in Goosebumps Night of Scares.

Fifi as she appears in Goosebumps HorrorTown.