Escape from the Carnival of Horrors

The cover illustration features a purple alligator breaking out of its cage.

Late on night you and your friends visit the old fairgrounds. They're putting up rides and booths for the annual carnival. But this year things look really different. Really odd. Really scary.

The place is lit up by a hundred fiery torches. And spooky music is coming from the main tent. Then you meet Big Al, the creepy carnival manager He's invited you in to test some of the rides.

Will you brave the terrifying Supersonic Space Coaster Risk the horrors of the Reptile Petting Zoo? Slice through the oily waters of Booger Bog? Or confront the evil Snake Lady? The choice is your in this scary GOOSEBUMPS adventure that's packed with over 20 super spooky endings.

You sneak into the closed annual carnival with your friends, Patty and Brad. But then you need to escape, because the carnival is evil. It is owned by a man who traps you and your friends inside the carnival. He forces you all to "test" out the rides, before the carnival opens and traps the entire city's population inside. The reader can decide to fight the monster of Booger Bog, face the psychotic carnival freak, the evil Snake Lady, brave the Supersonic Space Coaster, risk the attack of every reptile in the Petting Zoo, become slaves to Slappy or Mr. Wood, or ride the Doom Slide.

You decide to try out the carnival's rides. Having been separated from Patty and Brad (which happens no matter what choice you make), you then have to find them and escape the carnival.

You visit the sideshows, and are told that you have to play carnival games. But if you lose, you'll pay with your life...

From Story B, you get involved with the freak show, whose inhabitants are being held prisoner by an evil fortune-teller. You try to save the freaks as well as finding a way for you and your friends to escape.

There are twenty-two bad endings, one ambiguous ending, and two good endings. 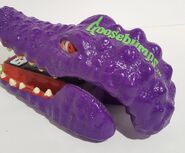 Gator Stapler (unpackaged, back)
Add a photo to this gallery 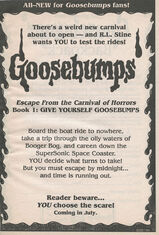 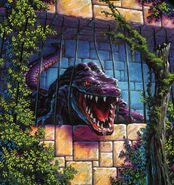 Retrieved from "https://goosebumps.fandom.com/wiki/Escape_from_the_Carnival_of_Horrors?oldid=130735"
Community content is available under CC-BY-SA unless otherwise noted.